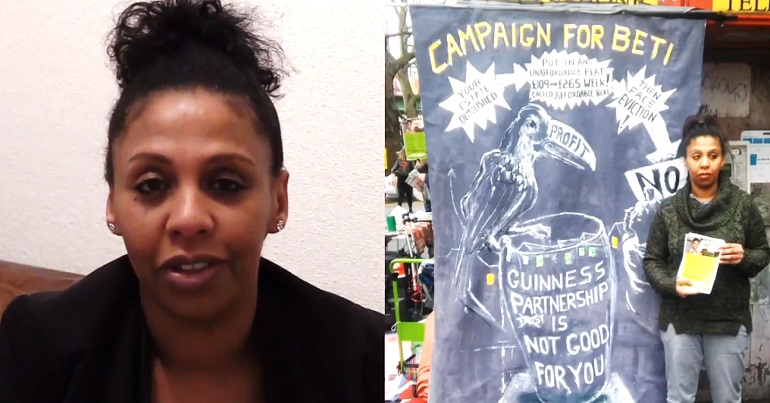 An ‘accidental activist’ who’s been fighting social cleansing is standing in the local elections for the Green Party. Her story, and the reasons why she’s standing, show the need for political candidates who truly represent us – because they are us.

Betiel Mehari, also known as ‘Beti’, is standing as a Green Party candidate in the Newington ward of Southwark, south London, in the local elections on 3 May. The story that got Mehari to this point is somewhat remarkable. So The Canary caught up with her to discuss her life, politics, and the sharp end of the UK’s housing crisis.

The Green Party has produced a short video about Mehari. She explains why she’s moved from activism to mainstream politics, and decided the best party for her is the Green Party:

You can read The Canary‘s full article on Mehari’s housing fight here. But in short, her housing provider Guinness Partnership demolished the Brixton-based Loughborough Estate in 2015. As The Canary previously reported, Guinness knocked down:

The block of 390 social rented flats because it said they did not meet the government’s Decent Homes Standard. Instead of refurbishing them, Guinness decided to build 487 new housing units.

It also changed people’s tenancies and relocated a number of families out of the borough, including Mehari and her two sons, despite her being a tenant with Guinness for 11 years.  And when it moved Mehari, it also whacked her rent up from £109 to £265 per week – a 240% increase. Coupled with losing her business because of the forced relocation and zero hours contract work meaning problems with her housing benefit, Mehari fell into rent arrears. A long and very public battle between her and Guinness began – one that’s still not resolved to this day.

Had it with Labour? Try the Green Party.

So Mehari, who is an ‘accidental activist’ by all accounts, has turned to politics to try and change things. She told The Canary that it was her own experience of estate ‘regeneration’ that drew her to the Green Party:

During the last five years, I came to realise that Labour, the party that I voted for all my life, no longer represent working class people like myself. The regeneration of the Loughborough Estate, carried out by Guinness and authorised by Labour-led Lambeth council, has affected many working-class people.

Lambeth Council was aware of the massive social cleansing and, from my personal experience, didn’t plan for how they would assist all the affected residents. Until we started campaigning, the council ignored us.

I chose the Green Party as I believe it will make regeneration fairer for all those affected by it. Its councillors will allow residents to have a voice in what happens to their estate.

The challenge for politicians of all political colours at the local elections is engaging with voters – especially working-class ones. Turnout at the 2014 local elections was just 35.7% [pdf, p2], showing there’s a real democratic deficit. Mehari recognises this challenge and believes this is down to two reasons:

Working-class communities don’t always engage in local politics, which means we don’t always have a voice. I think there are two reasons for this. Firstly, we don’t believe we have the power to change anything. So we just don’t bother voting. Secondly, working-class people are often so bogged down with simply trying to survive, we don’t have the time or resources to fight. And sometimes, we don’t even know how to.

But Mehari believes part of people’s disengagement comes from national politics as well. She said that the Conservative government is “harming” and “attacking” communities like hers at every turn:

Working-class people like myself are struggling to survive under the Tories. Low wages, zero-hours contracts, a lack of social or even affordable housing, benefit cuts, cutting school budgets, and destroying youth services: the list is endless.

She is not convinced that Labour has the answers either. Mehari noted that local councils like Lambeth and Southwark “don’t respect” Jeremy Corbyn or “what he stands for”. She says this leaves working-class communities “with little choice”. This is exactly why she has chosen to stand, and why she has chosen to represent the Green Party.

She has five priorities she would focus on if elected:

It’s these political focuses, coupled with an understanding of the communities she would represent, which makes Mehari stand out. Because while she recognises that working-class people are often disengaged from local politics, she knows all is not lost:

At the moment, many politicians simply don’t address our struggle, and the inequality that exists all around us. It’s because a lot of the time we don’t exist to them. This is why we need candidates who really represent us. Because when we start to vote and take part in politics, then politicians will value us and our votes. And hopefully, that will bring policies that make our lives better.

Mehari encapsulates exactly what is needed from politicians. The UK has had enough people with ‘Politics, Philosophy and Economics’ degrees from Oxbridge running things to last us a lifetime. What we need from politicians is actual lived experience, not empathy and hollow words. Mehari ‘gets it’ because she’s lived it. Exactly the quality we need in councils up and down the country.

– If you haven’t, register to vote in the 3 May local elections.