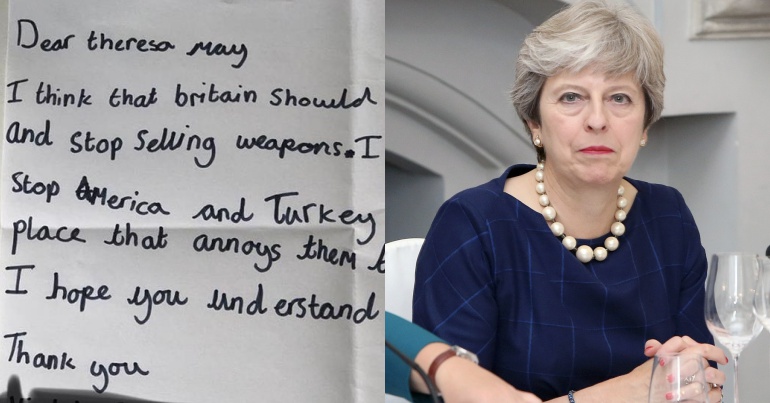 Following the 14 April airstrikes on Syria, an eight-year-old decided to write to Theresa May, Donald Trump and Jeremy Corbyn. The world needs to see her letters. Because although she’s only eight, her words are very important and moving.

May and Trump really should pay attention.

The US, the UK and France launched airstrikes in Syria after a suspected chemical weapons attack in Douma. The strikes took place only hours before an investigation by inspectors from the UN’s Organisation for the Prohibition of Chemical Weapons (OPCW) was due to start. Donald Trump, Theresa May and Emmanuel Macron defended the attack. But others, including UK Labour leader Jeremy Corbyn, were highly critical.

But as news of the strikes emerged, one young girl said she wished she “was old enough to speak out about it”. Her stepmother (who is a copy editor at The Canary) said, “you’re never too young to speak out”. So this eight-year-old found a pen and paper, and wrote to Theresa May.

Her message is very simple:

I think that britain should step out of the war and stop selling weapons. I wish that we could Stop America and Turkey from bombing every place that annoys them the tieniest bit. 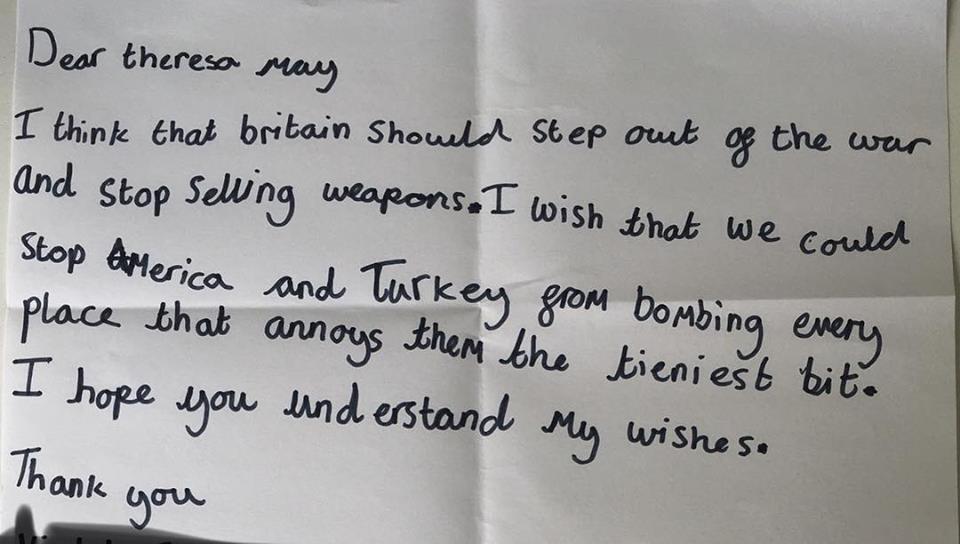 Theresa May faces serious questions from MPs about the lack of parliamentary debate ahead of the strikes, and what Corbyn referred to as May following “the whims of a US President”. And this young child has raised questions about why the UK failed to stop or challenge US actions.

The writer also highlighted Turkey’s ongoing involvement in the Syrian conflict. Turkish leader Recep Tayyip Erdoğan, a key ally of the UK and US, is behind increased violence in Afrin in northern Syria. The UK is also well known for fuelling conflict around the world. Currently, May’s government is facing legal action for arming Saudi Arabia.

Are you listening, May?

And the writer didn’t stop there. She also wrote to Trump. 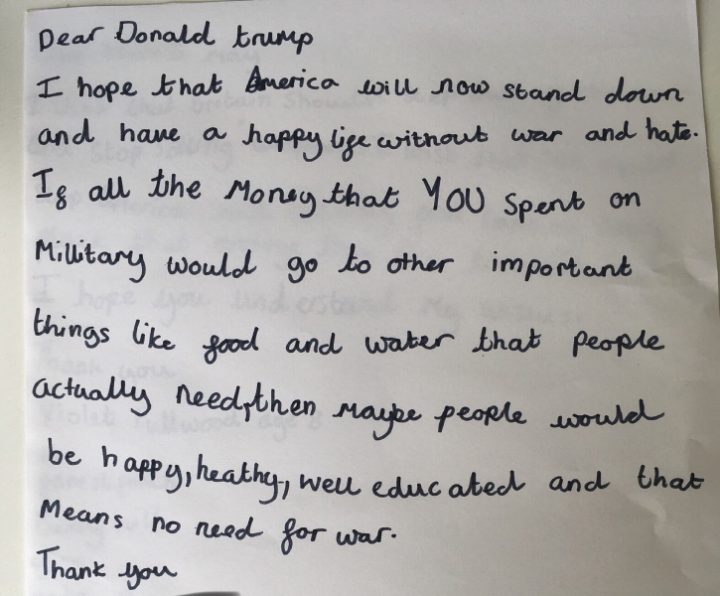 She’s got a point.

Under Trump, America’s defence budget has seen a 13% rise. Military spending will increase to $716bn in 2019. There are approximately 200,000 active-duty US troops deployed worldwide amid fears of a “growing militarization of foreign policy”. Meanwhile, US education under Trump will see further cuts of 5% and “major cuts to existing education programs”. And as fears grow about the safety of drinking water in the US, Trump has cut budgets to the Environmental Protection agency by 23%.

This eight-year-old also completely nailed the solution. Because she thinks Corbyn is serious “about how you avoid war and keep every one healthy”. 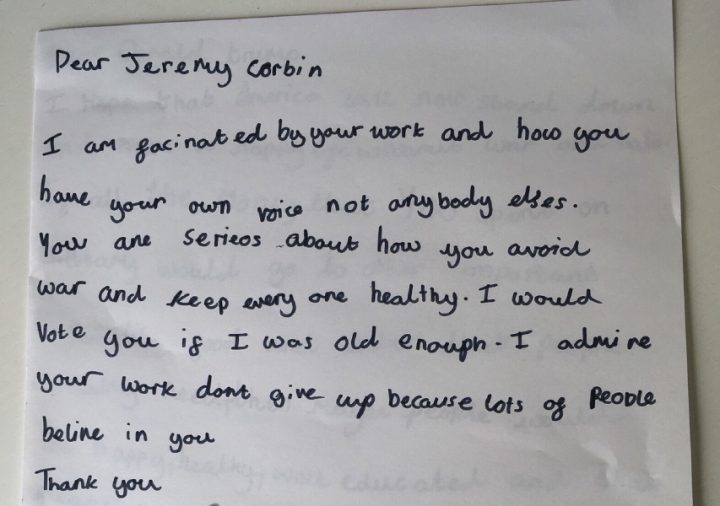 Corbyn, one of the most outspoken critics of the airstrikes, has gained international recognition and awards for his longstanding commitment to peace. An eight-year-old has clearly seen and heard enough to figure out that Corbyn is not afraid to speak out and challenge the airstrikes to avoid further escalation or conflict. Her simple wish to “avoid war” is heartbreakingly beautiful.

You are the future

When young people make statements like these to world leaders, we know that we are in safe hands for the future. This makes it even more important that those leaders listen. Because if they don’t, they will deny these children the future they deserve. This writer is the future, and that future is bright.

Featured images via The Canary and Wikimedia