Jeremy Corbyn explains how Theresa May makes policy. The phrase is going to stick. - The Canary 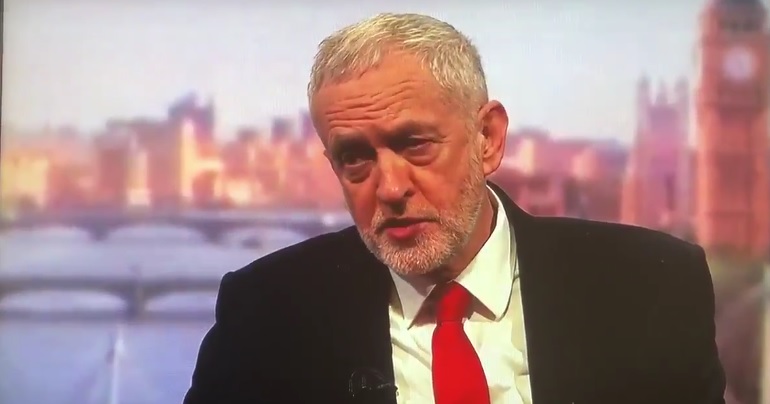 As the country digested Theresa May’s decision to bomb Syria, Jeremy Corbyn spoke about it on The Andrew Marr show.

#corbyn: ‘this is policy made up by twitter’ and even #marr says, ‘we’re not in favour of that’ pic.twitter.com/YsZTup83AA

Criticising her decision not to recall parliament to vote on the strikes, the Labour leader said the PM appeared:

We’re not in favour of that.

Corbyn’s explanation of the government’s policy ‘strategy’ came after Donald Trump tweeted in the lead up to the strikes:

The prime minister did not distance herself from this rhetoric. She tied her colours to Trump’s mast instead of recalling parliament.

But Corbyn also called for a war powers act on the show, which would ensure parliament gets a say in military action in future. He said:

What we need in this country is something more robust, like a war powers act, so that governments do get held to account by parliament for what they do in our name.

Many people, like Corbyn, also opposed the strikes and took to social media to express that opposition.

Some people highlighted that we should take refugees instead of dropping more bombs. This was a point made brilliantly by comic, David Schneider.

An official reminder of what’s an appropriate response to “overwhelming humanitarian necessity”.

NOT APPROPRIATE
Taking in refugees https://t.co/3K4mRQeuZv

Government: “We were all moved by the terrible suffering caused to people in Syria by bombs”

“So you’ll take in some refugees?”

May’s government announced in 2017 that it would close the Dubs scheme after only accepting 350 children. This would have granted asylum to thousands of child refugees. And yet here we are again – firing missiles with no clear plan and no apparent desire to do anything about the refugee crisis.

Theresa May claims to care about children.
Yet her govt scrapped the Dubs amendment for child refugees.

Theresa May claims to care about the NHS.
Yet her govt would rather fire missiles at £800,000 a pop risking civilian life, than fund the NHS.#SyriaStrikes

Corbyn’s performance on Marr resonated for many. Because it gave people a welcome break from the hawkish backslapping seen elsewhere.

The Labour leader’s plan to introduce a War Powers Act would ensure major decisions like this one on Syria are taken by parliament. This would be a fair way to ensure British people get a say on matters committed in their name, and maybe put a break on the constant rush to war.