While people across Britain unite to support the Windrush generation, The Telegraph sticks the boot in - Canary Workers’ Co-op 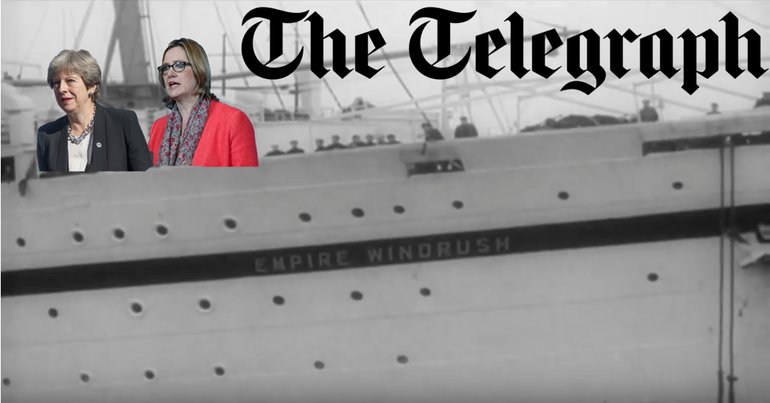 The people of the Windrush generation were invited to the UK as citizens to help rebuild after World War II. Now, the May government has rebranded them illegal immigrants. The Home Office is deporting them to countries they’ve not lived in for half a century, tearing families apart. But the most important thing to The Telegraph is that we don’t let this incident make us soft on immigration.

While home secretary, Theresa May passed an immigration bill which undid the rights of the Windrush generation. People have lost their jobs, been denied life-saving treatment from the NHS, and even been deported. It was only after the scandal made headlines that May and her home secretary Amber Rudd were forced to U-turn. But people are still being deported, and those who have already been deported face an almost impossible journey home.

While outrage was almost unanimous across civilised society, The Telegraph felt we should remember our priorities.

The phrasing of the headline is interesting because it directly references May’s promise to create a “hostile environment” for illegal immigrants.

Theresa May and immigration

May’s treatment of the Windrush generation should surprise no-one. As home secretary, she made clear she’d adopt a stridently anti-immigration approach. In 2012, she told The Telegraph:

The following year, May sent her racist ‘Go Home‘ vans around London. The vans told illegal immigrants to go home or face deportation, even providing a tip line to dob people in.

Lets not forget that Theresa May was the person who implemented the current mess at the home office regarding the #Windrush situation. She was also the racist genius behind this van. pic.twitter.com/t1KKSrReDA

And in 2015, she gave an infamous anti-immigration speech at the Conservative Party conference. During which, she recited several anti-immigrant myths. May argued that “millions” of immigrants were headed for Britain’s shores, and that existing immigrants were:

As most people are now aware, these are not the effects of immigration. They are the effects of Conservative cuts to police, the NHS, education, and welfare. And nothing breaks down social cohesion like grinding poverty and rising racism.

The normally-restrained Institute of Directors accused May of a “chilling and bitter” speech, and demanded she “stop vilifying migrants.”

It’s important to note that May was doing all this while Syrian refugees were drowning in the sea trying to flee the ongoing civil war. May’s government voted against allowing 3,000 Syrian children safe harbour in Britain.

The Telegraph need not worry. There is little chance of May creating anything but a hostile environment for newcomers to Britain – from displaced Syrian children to the Windrush generation. What makes matters worse is that this is not the result of incompetence. This was not an accident. It was not a good policy gone awry, but a bad policy gone right. This was the intended result of May’s policy – to deport long-established UK citizens to countries they’ve not called home since the 50s and 60s. What went wrong for May and Rudd was public sympathy. They had counted on bigotry saving the day. And this time, it didn’t.