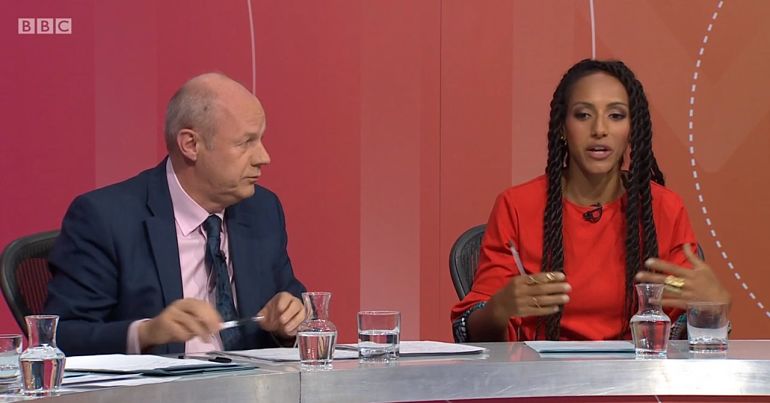 Speaking on Question Time on 21 June, journalist Afua Hirsch cut through the government’s spin and launched a scathing attack on the Conservatives’ commitment to austerity.

“You can’t take the politics out of this”

As panellists and the audience went back and forth – reproducing tired old arguments about NHS efficiency and UK productivity, Hirsch stepped in to brilliantly nail the bigger picture.

We need to reform the NHS. But that’s not the nub of the issue. The nub of the issue is that we have had over a decade of austerity that has created multiple problems that have put funding squeezes on the NHS. And you can’t take the politics out of this. Because politics helped create this problem. It’s not just social care – it’s also homelessness, it’s poverty. These things are all combining to put a huge strain on our public services.

And she finished with an explosive attack on the Conservative government’s commitment to austerity:

.@afuahirsch says that multiple problems created by long-term austerity has increased the funding squeeze on the NHS #bbcqt pic.twitter.com/SwDolQEDHE

. @afuahirsch wins #bbcqt hands down tonight. Someone please put her in charge. Of pretty much everything.

She's the MVP so far tonight!

Others, meanwhile, looked more deeply into why this government might be addicted to austerity:

Hirsch’s analysis impressed people so much because it is a point which is so rarely made. Isolating issues such as NHS funding serves a particular political purpose:

Yaaaaaaaas Afua Hirsch. Treating issues on their own deflects from the overall horrific affect of zombie austerity. #bbcqt pic.twitter.com/OwA2FeI5jq

In the case of the NHS, this government’s relentless austerity drive has put it under pressure in more ways than just how much money it receives. For example, a recent report by the MS Society found that cutting the disability benefits of people living with multiple sclerosis is costing the NHS £7.7m a year. And research by Crisis states that:

people who experience homelessness for three months or longer cost on average £4,298 per person to NHS services.

Rough sleeping has increased by 169% since the government came into power in 2010.

An article in the Guardian, written by a professor of economics and public policy at Kings College London, paints a bleak picture for the future too. It estimates that this government’s continued commitment to balancing the books is estimated to plunge another 1.5 million children into poverty in the next five years. Dealing with health issues associated with poverty costs the NHS £29bn a year.

The government is proposing to increase NHS funding by just £20.5bn per year.

Even if the Brexit brigade’s wet dream becomes a reality and the mysterious Brexit dividend defies expert analysis and actually exists, it still won’t solve the issue of a creaking NHS.

That’s perhaps why Hirsch got so much love for her performance last night:

I’m really, really not used to getting this much love for the things I believe, and say on air. I’d keep saying them anyway, obv, but thank you to everyone who has sent me such generous and positive comments 🙏🏾🙏🏾🙏🏾 #bbcqt

Hopefully, it is a sign that the tide is turning against this government’s relentless commitment to austerity.

If it doesn’t, the NHS cannot stay afloat.