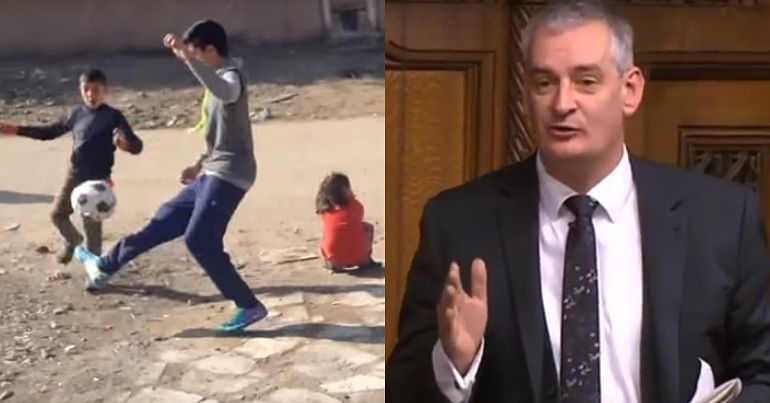 Blairite Labour MP Graham Jones is facing the mother of all backlashes on social media after displaying a staggering level of ignorance in just one tweet:

Jones resigned from the Labour front bench when Jeremy Corbyn was elected leader in 2015. As the Rossendale Free Press reported:

Mr Jones said he could not serve under Mr Corbyn as he was from the ‘extreme left’ and did not hold Labour’s ‘true values’.

And he has consistently voted in favour of using Britain’s military abroad as well as voting against holding an investigation into the invasion of Iraq. So he has certainly earned his ‘Blairite’ tag.

Oxfam’s initial tweet was simply an attempt to humanise refugees displaced by post-2003 instability and conflict in Iraq:

Many of us are watching the #WorldCup at this time. We share these beautiful photos of young Iraqi’s playing football to remember that these young stars weren’t able to enjoy their favorite game under ISIS and were then forced to flee their homes. #ENG #BEL #WithRefugees pic.twitter.com/WCJLqBjShi

Yet Jones saw it as an opportunity to pursue his bizarre agenda, saying:

Some cheek. They can only play because the Iraqi people with help from the west liberated them through military action.

Some people couldn’t work out quite what he was getting at:

What? It's a charity showing pictures of some refugees playing football in a country that's been devastated by a succession of wars. What part of that is "some cheek"?

Evolve Politics, meanwhile, decided to run a fact check on his claim:

You have absolutely no idea what you’re talking about, you utter melt. https://t.co/CQnZHfzyLC

Looking back into Jones’s past sheds some light on the possible meaning of his tweet. In 2016, he spoke glowingly about the benefits of UK airstrikes on Iraq:

without those strikes the Iraqi army would not have been able to go into Daesh held territory and push them back. Those air strikes are what has turned this around and what is going to result in the demise of Daesh.

And speaking to the Rossendale Free Press, he discounted the idea that UK intervention in 2003 had helped to create Daesh:

Daesh is not a western problem, Daesh did not occur because of the operation in 2003 or the toppling of Saddam Hussein – it’s because of the failure over the centuries of power sharing in Iraq.

As The Canary‘s Ed Sykes wrote previously about the 2003 invasion of Iraq:

The manufactured war against a dictator who the West once supported was an absolute disaster. It reportedly killed at least a million Iraqis and left thousands of children with deformities and cancer. And amid all that death and destruction, the context of anti-occupation resistance and the dissolution of the Iraqi army (and state) gave the forerunners of Daesh (Isis/Isil) fertile ground to grow. The years since have seen global terrorism skyrocket (with Daesh and similar Wahhabi groups responsible for the majority of non-state terrorism).

In fact, even Tony Blair himself has acknowledged the link between the invasion of Iraq and the rise of Daesh.

I suppose you think they should be grateful for a war that left a million people dead and "liberated" them into the arms of ISIS, subjecting them to further untold horrors?

The 'cheek' is all yours, you disgusting colonial imperialist war mongering excuse for a human being.

What Graham meant to say:

Enjoy your kick about guys. Sorry we fucked up your country and created the vacuum for ISIS to exist.

A million dead in an illegal war !!

Let me rephrase this for you – 'Some cheek. They were only oppressed by ISIS because New Labour blindly followed the US into an illegal war built on lies, that threw the country into chaos and was the catalyst for instability in the middle east as a whole.

I’m ashamed that you’re a Labour MP. You should do us all a favour and apologise immediately.

And one Twitter user summed the situation up sarcastically, saying:

Incredible ratio.
Finger on the pulse of the nation ☝️ pic.twitter.com/QmPv8rQ9xg

Jones displayed a staggering level of ignorance and poor judgement in his tweet. But thankfully, people aren’t letting him get away with it.