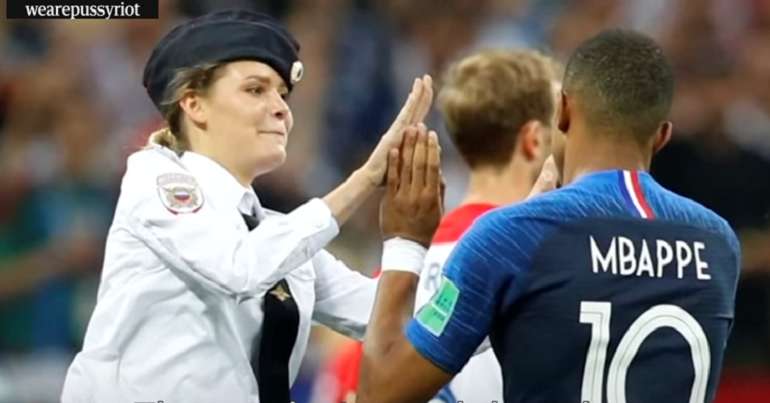 It cites human rights concerns as a reason for the action.

Three women and one man ran onto the pitch during the World Cup final between France and Croatia, before security apprehended them.

One of the women, Olga Kurachyova, told Reuters that she participated in the protest and is currently being detained in a Moscow prison.

They have since been charged with “violation of spectators’ rights” and illegally wearing police symbols.

The activists claim that they carried out the action to draw attention to President Putin’s authoritarian style of governance.

Speaking out against the government – whether through peaceful protest or even clicking a ‘like‘ button on Facebook – can land you in prison. The suppression of political opponents is also a problem, according to human rights activists.

LGBTQ+ rights, meanwhile, are dismal – particularly after Putin passed a law in 2013 prohibiting the promotion of non-traditional sexual relations and barred same sex couples from adopting. And in Chechnya, a quasi-independent state within Russia, the crackdown on LGBTQ+ rights in 2017 saw gay men rounded up, beaten and imprisoned, causing international outrage.

Some Pussy Riot members have themselves been subjected to two years of imprisonment for speaking out against Putin.

According to the band’s Twitter page, the authors of the pitch invasion are still in custody:

Current situation: the 4 pussy riot members spent the whole night at the police station (note that there are no conditions to sleep, eat, take a shower etc) and are still there — going to be brought to the court. They are facing charges for administrative offenses so far.

Attention! The court has just sentenced the first Pussy Riot member, Veronica Nikulshina, with 15 days of administrative arrest (will spend them in a special prison) and banned her from visiting sports events. pic.twitter.com/e0hX5fQSzl

A number of groups around the world have already shown support for the World Cup protest.

The band issued a list of demands to the Russian government on Twitter, including freeing “political prisoners”, ending “illegal arrests” at protests, and allowing “political competition”.

The reference to ‘the heavenly policeman’ at the end of the group’s demands points to the anniversary of the death of non-conformist Russian artist and poet Dmitri Prigov. His concept of the ‘ideal policeman‘ is seen as a critique of authoritarianism.

The members of Pussy Riot involved in the World Cup protest risked their freedom to give a voice to Russia’s prisoners of conscience. And in doing so, they forced the world to sit up and take note.

If Putin was hoping to whitewash the human rights abuses of his government behind the theatrics of the World Cup, he has failed miserably.

– Sign the petition calling for the release of film-maker Oleg Sentsov. Find out more about him here and here.