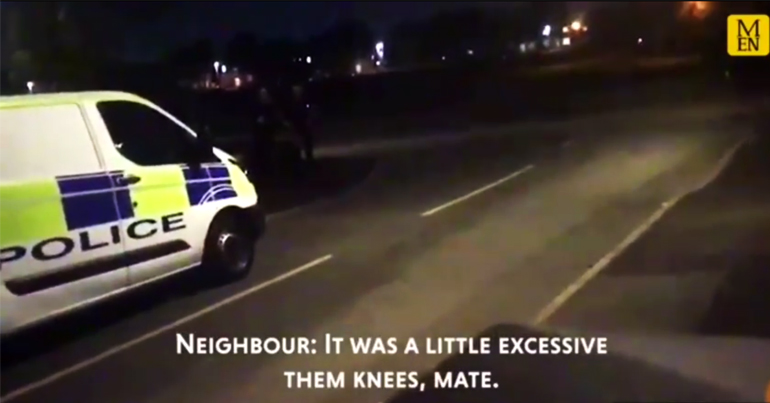 A man died in police custody on 7 July after he was detained for ‘breaching the peace’. Greater Manchester Police arrived at Andre Moura’s property in Oldham at about 11.30pm on 6 July, following reports of a domestic disturbance. But video footage shot by a neighbour shows police admitting to kneeing Moura in the head while restraining him.

Footage filmed by a neighbour during Moura’s arrest was published by the Manchester Evening News. In it, Moura can be heard screaming “help” and “help me” several times. The neighbour, Barry Lee Martin, later confronts a police officer.

You just kneed him about several times.

To which an officer replies:

Pointing at the officers, Martin then says:

Three of you had hold of him and he kneed him several times.

And the same officer responds:

Tell that lad to do one inside. He’s shouting all sorts.

At the end of the video, Martin reports his concerns to a second police officer on the street, saying the officers had Moura “up against the wall”. But the officer responds to Martin by stating:

But you don’t know what they’re dealing with though do you?… Go inside for me.

Moura screams throughout the video.

Following Moura’s arrest, he was taken to Ashton-under-Lyne police station where he was found unresponsive. He was confirmed dead at Tameside Hospital at 1.30am on 7 July.

Following a mandatory referral by Greater Manchester Police, the Independent Office for Police Conduct (IOPC) is conducting an investigation. The IOPC states that officers restrained Moura with CS spray. It’s investigating claims that he spent “around 15 or 20 minutes” inside a police van before being taken to the station. The IOPC is also investigating the allegation that Moura was kneed in the head during his arrest.

As a result of the death, ten officers are on restricted duties.

Originally from Portugal, Moura, 30, had lived in Oldham for around five years with his partner and four daughters.

On 14 June, it was announced that no Greater Manchester Police officers would be prosecuted for the death of Jordan Begley. Six officers faced investigation following Begley’s death in 2013. Officers Tasered Begley during arrest and he later died from cardiac arrest.

Inquest, a charity that monitors state-related deaths, says 1,083 people have died in police custody since 1990 across England and Wales. No officers have been found guilty of murder or manslaughter.