As a key Brexit vote passes, Vince Cable and Tim Farron are nowhere to be seen - The Canary 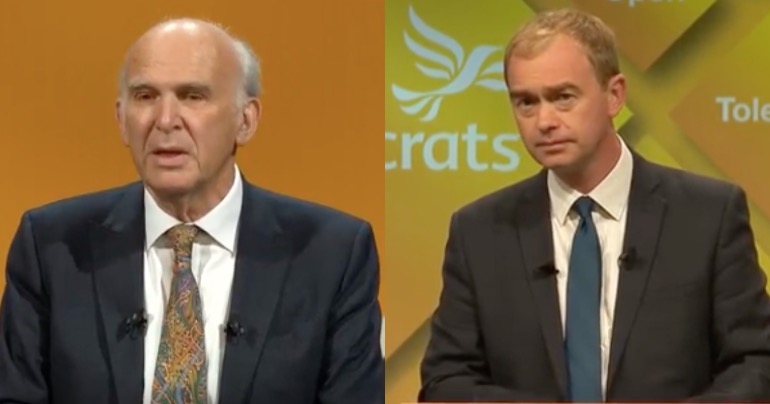 Tim Farron’s priorities lay elsewhere as he instead decided to give a lecture about how well his views on gay sex fly in the world of politics. His talk in Sherborne pertained to his struggle with being an evangelical Christian and a liberal politician. Old habits do indeed die hard for Farron, as he previously embarrassed his party with his backwards opinions on homosexuality during the 2017 general election. The damaging distraction contributed to a disappointing election result, and ultimately his resignation as Lib Dem leader.

Farron’s successor Vince Cable was also absent from the key Brexit votes, which ended in the amendment passing with a majority of just three. Had both Cable and Farron voted, it would still have passed. But this highlights an alarming apathy at the forefront of the Liberal Democrat party. According to ITV‘s Robert Peston, Cable was “off the parliamentary estate at an important meeting”. This was apparently approved by Lib Dem whips because they “didn’t expect vote to be close”.

LibDem source says @vincecable was “off the parliamentary estate at an important meeting” and his absence was “approved by LibDem whips” – because LibDems “didn’t expect vote to be close”. Shame in this age of social media there’s no way of staying in touch https://t.co/xVuzm25G6x

The Lib Dems have relentlessly criticised Jeremy Corbyn for his decision to accept the referendum result. Cable attacked Corbyn earlier on this year, stating:

Jeremy Corbyn is crucial to [Brexit]. The vast majority of his MPs and his party and his supporters are very concerned about the fact that he hasn’t opposed Brexit. He has effectively worked in collusion with Theresa May and her Government to enable Brexit to happen. I think there is a simmering anger about that

Despite Labour voting against 72 of the 83 Brexit bills, Labour still faces considerable criticism from the pro-EU party.

Next time someone tells you that Labour should "Stop backing Brexit"…. show them this. pic.twitter.com/A8hY1CpXEx

So it comes as no surprise that people are confused as to why the leader and ex-leader of a party so adamantly opposed to Brexit didn’t even bother to vote on crucial Brexit legislation.

Tim Farron has since apologised, stating:

In the end nobody expected the vote to be as close as it was – I’d actually cancelled the engagement earlier on, but then uncancelled because we expected Labour to abstain and the government to win by miles… We clearly called it wrong, as did Labour. I take full responsibility for my part. The Tories don’t deserve any luck, I’m so sorry I inadvertently granted them some.

As we have seen with Lib Dem leaders on numerous occasions, there’s a whole lot of apologising and not enough action. The subsequent legislation could render the UK victim to a hard Brexit or a no-deal scenario. The party whose supporters sang “Where’s Jeremy Corbyn?” at the People’s Vote march should now be asking the same question of their senior MPs. The answer will most certainly embarrass Lib Dem supporters, as whilst Corbyn missed a march to visit refugees in Jordan, Farron missed a crucial vote to preach Victorian values at £5 a pop.