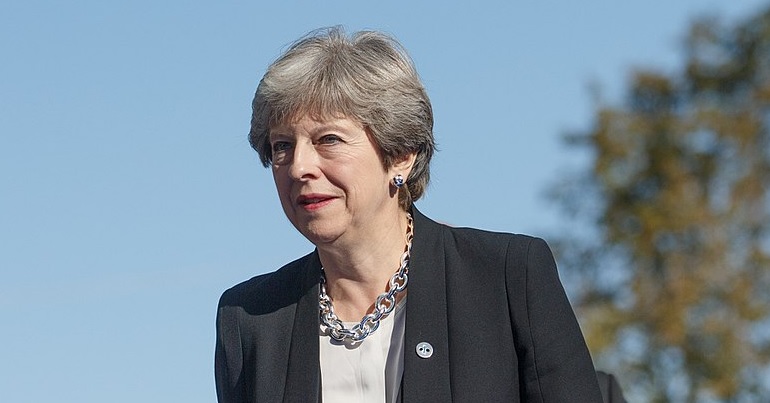 On 15 July, Theresa May’s government released a list of the interested parties it had invited to the Farnborough International Airshow.

Included on the list for the arms-dealing event was one of May’s most controversial partners: Saudi Arabia. And it’s hard to see how her premiership can survive welcoming the kingdom after its latest announcement. Because the PM’s ally just pardoned itself for any war crimes it may have committed in Yemen.

A Saudi-led coalition has waged a war on the impoverished, brutalised country of Yemen since 2015. Throughout the assault, the UK has supplied the kingdom with billions of pounds’ worth of arms.

NGOs and a number of MPs have pressured the UK government to stop selling arms to the country. Because reports suggest that the Saudi-led coalition has “committed serious breaches of international humanitarian law”. The UK, however, argues that while it takes allegations of human rights violations “extremely seriously”, such allegations must be “thoroughly investigated” first.

To date, the government has said the Saudi-led coalition should carry out those investigations itself. It appears content for the accused to be in charge of assessing its own guilt. And Saudi Arabia has now reached a conclusion. King Salman bin Abdulaziz Al Saud will pardon all soldiers for any “military and disciplinary penalties” in relation to “some rules and disciplines” in the Yemen assault. The pardon is for all military personnel who have taken part in what Saudi Arabia calls Operation Restoring Hope, which began in April 2015 and continues today.

In short, Saudi Arabia has decided to let itself off the hook for any crimes it may be guilty of in Yemen.

The UK claims to have one of the “most robust” regimes in place for arms sales. In that regime, it cannot grant licences for military equipment if there’s a “clear risk” that the buyer may use it to break international law. So Saudi Arabia’s pardon makes future sales untenable on two levels.

Firstly, why would it need to pardon soldiers from “penalties” if they didn’t commit them? The pardon itself would be unnecessary if military personnel didn’t break any laws.

Furthermore, the UK government is now in the impossible position of basing its own conclusions about whether there’s a “clear risk” of violations on investigations carried out by a country that doesn’t appear to think international law applies to its own military personnel.

May has somehow managed to defend the indefensible with these arms sales for some time now. The fact that the conflict has killed many thousands of civilians and looks set to put 18.4 million Yemenis on the brink of starvation by the end of this year should have been enough to end them. But this new revelation will strengthen the case against arms sales to Saudi Arabia even more.

And it’s not just arms sales. The UK also has personnel embedded in Yemen, providing “information, advice and assistance” to Saudi Arabia. So it’s on the ground ‘working with‘ the country that just pardoned itself.

The prime minister has faced numerous resignations recently over Brexit. Her grip on power is fading. So the last thing she needs right now is to look even weaker than she currently does. And taking no action on this outrageous Saudi pardon would do just that.

May didn’t stop Saudi Arabia attending Farnborough’s military soiree, though. And if that’s how she intends to proceed, we need to make it one of her last acts as prime minister.

– Email your MP and ask them to raise this issue in parliament.

– Email Theresa May to tell her what you think about continued arms sales to Saudi Arabia.