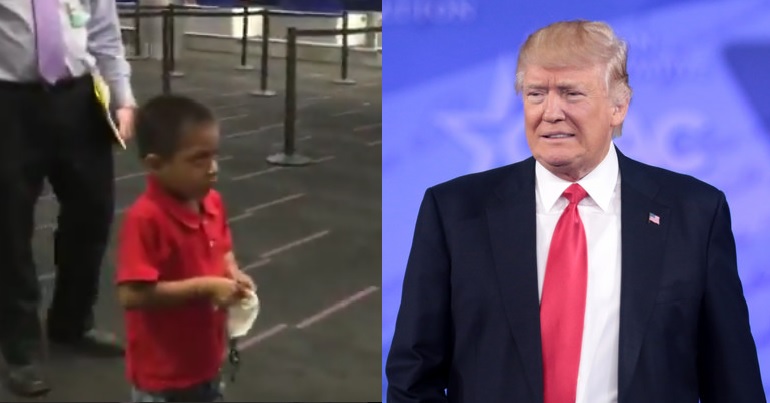 The LA Times has released footage of the reunion of a parent and child separated through the USA’s barbaric immigration policy. And the state of the child when he reached his father should topple Donald Trump’s government.

In May, Trump’s regime decided to separate children and parents who arrived at the US border seeking entry. His so-called “zero tolerance” policy caused widespread outrage before Trump backtracked and scrapped it in June.

In a lawsuit involving one of the stolen children, a judge ordered Trump to return all the kids under five to their parents by 10 July. He didn’t meet the deadline. But the US government is now slowly reuniting children with their parents.

Jefferson Che Pop is one of those kids. US immigration authorities tore the 6-year-old Guatemalan boy away from his father, Hermelindo, two months ago as they tried to seek asylum. The authorities released Jefferson back into Hermelindo’s custody on 14 July.

A shadow of his former self

But Jefferson wasn’t the same boy the US authorities stole from Hermelindo two months earlier. As LA Times journalist Esmeralda Bermudez explained, Jefferson was a happy kid before his time in detention:

Here is an old photo of Jefferson in his village in Guatemala. He proudly wore his Sunday best & on the ground there is a bag of pan dulce, a treat his dad used 2 buy him after mass. Hermelindo showed him this photo on their way home from LAX & the boy smiled for the first time pic.twitter.com/bfkSA69BSH

But following those months in the ‘care’ of US authorities, Jefferson was a shadow of his former self. At the reunion, he barely looked up. He didn’t smile. In fact, the child appeared completely devoid of emotion, as if he didn’t recognise his father. Hermelindo cried out to the boy, saying:

In an LA Times article on the encounter, Bermudez detailed Hermelindo’s situation and the preparations for his son’s homecoming. She wrote of the reunion:

But no amount of planning could have prepared him for the empty gaze he’d find in his son’s eyes as he swept the boy into his arms. Jefferson Che Pop, a playful boy who loved racing tiny cars across the dirt floor of his Guatemala home, stood stiff, staring vacantly at the gray carpet, then at his father.

Bermudez claims Jefferson also had “a cough, bruise on his eye & rashes all over his body”. And he was much thinner than he was when the authorities separated them. Hermelindo told Bermudez, through tears:

This is not how I gave them my son. My son has come back to me sick.

This video is traumatic enough to watch. But just imagine living through it. That’s exactly what Trump forced this family to do. And he has done so to punish this family for the ‘crime’ of wanting to live in his country.

The US authorities have even ordered kids as young as three into court to defend their immigration claims – without their parents present. No wonder some of them can’t remember who their parents are, or think their parents have been killed. No wonder kids come out of detention looking like they’ve died inside.

That’s what we’re watching happen to these kids right before our eyes. Thanks to America’s bastard-in-chief.

– Take action with HOPE not hate.