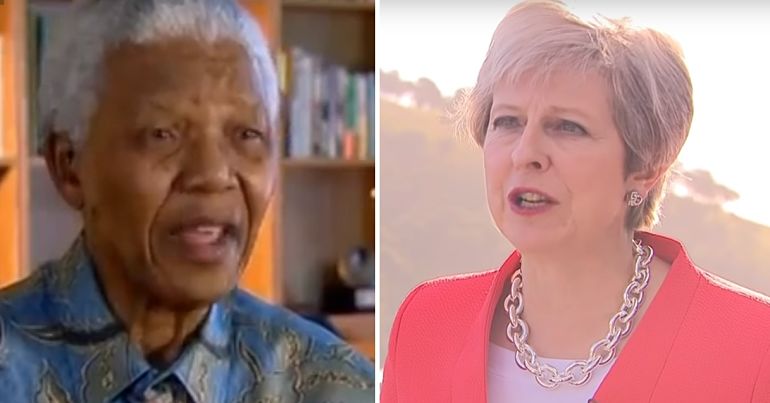 "Mrs Thatcher believed that Nelson Mandela was a terrorist…Did you think the same thing?"@Theresa_May is questioned by @MichaelLCrick about her stance on apartheid ahead of her visit to Robben Island, where Mandela was imprisoned. pic.twitter.com/8NdT41d1ah

You were active in politics in the 70s and 80s. What did you do to help release Nelson Mandela?

May desperately tried to deflect the question before admitting:

I think you know full well that I didn’t go on protests, Michael.

She then attempted to praise the work the UK government at the time did in tackling apartheid in South Africa. But Crick didn’t let her get away with such nonsense:

Hang on a moment. At that stage, Mrs Thatcher believed that Nelson Mandela was a terrorist.

He then nailed home May’s hypocrisy in visiting Mandela’s former prison on Robben Island, asking her:

Following the interview, May did visit Robben Island:

She declared that Mandela’s:

legacy lives on in the hopes and dreams of young people here in South Africa and around the world.

But the chasm between her words and her past inaction was insurmountable to many:

Brilliant questions from C4 Michael Crick to Theresa May on her African tour. She did not protest about apartheid and yet allowed a photo opportunity in Mandela's prison cell. Total hypocrisy.

Theresa May, hypocrite and liar.

What did you do to help Mandela when he was incarcerated Mrs May.
Well let me be clear Michael FUCK ALL.

Many also saw a huge difference between May and Jeremy Corbyn’s record in opposing apartheid in South Africa:

Yep, like the overwhelming majority of her party, @theresa_may believed that Nelson Mandela was a terrorist, or just didn’t care. Tories in the 1980s jeered anti-Apartheid protestors, thought them “terrorist sympathisers” & encouraged their arrest. I know, because I was there. https://t.co/SxaeqWNjK1

And shadow chancellor John McDonnell made it very clear who was on the right side of history:

For years there was a 24 Hour permanent picket of South Africa House in Trafalgar Square that Jeremy and I supported. I spent one Christmas Day there singing anti apartheid carols. This was at a time when the Young Tories & many Tory MPs were calling for Mandela to be hung. https://t.co/cGZINmU3SU

An Oxford Labour councillor brilliantly summed up why it’s no surprise that May did nothing to oppose apartheid. He tweeted that “fundamental to Tory ideology is the defence of hierarchy, inequality and injustice”:

It's no surprise Theresa May did nothing to oppose apartheid: Fundamental to Tory ideology is the defence of hierarchy, inequality & injustice. https://t.co/lqwRaMPp1u

Thankfully, Crick’s excellent interview demonstrated that actions, or the lack of them, speak much louder than words.