In a fierce show of solidarity, women are sharing their knickers - Canary 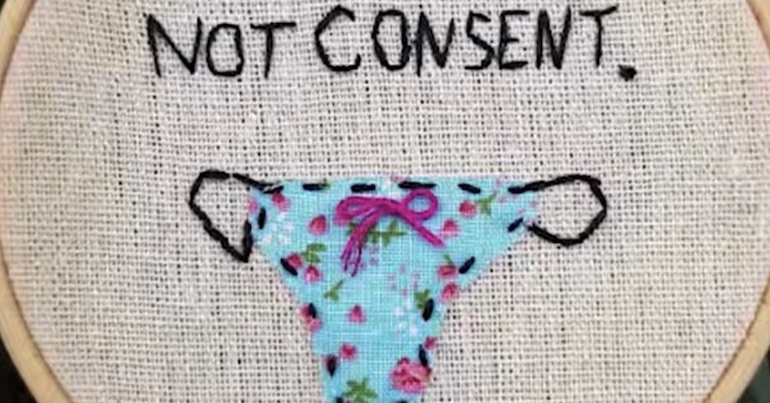 On 5 November, a 17 year-old-woman lost her case against a 27 year-old-male accused of rape. The trial focused on the issue of consent. The complainant insisted there was no consent. But since then, one line in the defence lawyer’s summing up of the case has led to a fierce and incredible show of solidarity from women around the world.

Reports of the trial do not make for easy reading. As the Irish Examiner documented, “in the immediate aftermath of the disputed sexual incident” the complainant clearly stated: “You just raped me”. Yet the defendant said, “No, we just had sex”.

The defendant claimed they kissed. But prosecution lawyer Tom Creed said, “There is not one person who saw you kissing”. Although the defendant claimed someone had, that person didn’t give evidence. When asked if sexual activity occurred, the defendant claimed: “it was possible that it did but he did not think so”. Allegedly, he had his hands around the defendant’s neck. A witness saw this and asked if the claimant was okay. The defendant reportedly replied, “in a sarcastic manner… ‘What the fuck does it look like. Mind your own business'”.

But in summing up the case, the defendant’s lawyer Elizabeth O’Connell told the jury:

Does the evidence out-rule the possibility that she was attracted to the defendant and was open to meeting someone and being with someone? You have to look at the way she was dressed. She was wearing a thong with a lace front.

After one and a half hours, the jury of eight men and four women found him not guilty. Since then, O’Connell’s comments have sparked global outrage and the most incredible display of solidarity. Thousands of women shared images of their underwear with the hashtag ‘This Is Not Consent‘.

The hashtag is still gathering momentum. There is a simple message: no matter what a woman wears, it’s never an excuse to defend rape. Nor does any item of clothing ever give consent

One of the first groups to lead the way was I Believe Her. This was set up by Susan Dillon following another controversial rape trial in March:

Counsel for man acquitted of rape suggested jurors should reflect on underwear worn by the 17yo complainant. Following this wholly unacceptable comment, we are calling on our followers to post a picture of their thongs/knickers to support her with the hashtag #ThisIsNotConsent pic.twitter.com/ZkVU0GVAIN

Solidarity is growing. Rape is rape. That is it:

Jurors in Cork were asked to consider the underwear a SEVENTEEN YEAR OLD GIRL was wearing when she was raped by a 27-year-old man.

Join the cause in solidarity, can’t believe this girl was subjected to these comments after such a traumatic event.#ThisIsNotConsent #Ibelieveher pic.twitter.com/PfkYERulgY

The culture of victim blaming for rape, shown by the barrister in Ireland, is disgusting. A woman’s appearance – whether it is a short skirt, make up, or a thong – never equals consent. #ThisIsNotConsent pic.twitter.com/UbwfQIAtgo

And the hashtag is spreading globally, as one French woman said, “yes, even naked in a field”:

Over a million people watched a film by Now This outlining the case and the solidarity it’s provoked:

Behind this solidarity lie some devastating facts. The World Health Organization estimates that “about 1 in 3 (35%) of women worldwide have experienced either physical and/or sexual intimate partner violence or non-partner sexual violence in their lifetime”.

According to Rape Crisis, approximately “85,000 women and 12,000 men are raped in England and Wales alone every year”. In 2017-18 Rape Crisis recorded a 17% rise in people accessing its services from 2016-17.  It also reported that women accounted for 93% of its service users. But despite this, rape crisis centres have warned about the impact of funding cuts since 2015. It recently stated centres still faced “a funding crisis due to chronic underfunding and long-term failure to invest in services”.

As I Believe Her state, many survivors of sexual violence struggle to come forward or contact police because of:

the fear of not being believed, the guilt and shame that society makes survivors feel, and the trauma of the rape itself.

We need to end this culture of shame. And we need to stand in solidarity with this 17 year-old and with every single rape survivor. Until we live in a society where there is no sexual violence, we must stand with every woman who is brave enough to speak out against it.

There are no excuses. Understanding consent is fucking simple.

– Read this poem by The Canary‘s Claud Fullwood

–  Support groups that help women in the UK and around the world: Sisters Uncut, Women’s Aid, Women on Wings, The Fawcett Society, Body Gossip, I Believe Her

– Add your support and share #ThisIsNotConsent on your social media groups