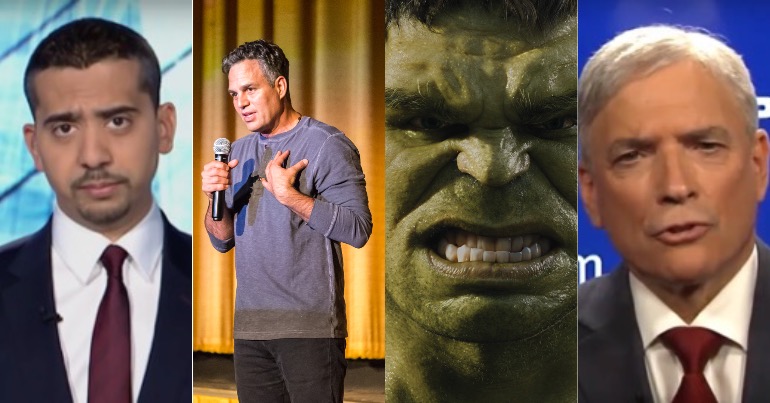 Hollywood A-lister Mark Ruffalo – aka the Incredible Hulk in the Avengers film series– has praised journalist Mehdi Hasan, for a viral interview in which he dismantled Steve Rogers, a member of Trump’s advisory board:

There is such thing as the truth, even today. This is how a journalist does their job to uncover it. https://t.co/TD4jQUX4xX

So what was Hasan’s magic tactic?

He read back Trump’s own quotes and claims and then emphatically proved them to be false. He then dogmatically hammered home those points until Rogers had nowhere to go.

His performance was simple, effective, and from the perspective of Rogers, excruciatingly embarrassing.

You can watch it here:

Hey US media folks, here, I would argue immodestly, is how you interview a Trump supporter on Trump's lies:pic.twitter.com/D8qElaic7o

To see a Trump ally so visibly rattled was refreshing.

Praised for doing his job as a journalist

Hasan has been a divisive figure on the left at times. He was infamously shown to have asked for a job at the Daily Mail despite previously criticising the outlet.

But here he was on fire and received universal praise:

Hey @cnn @CBSNews @MSNBC @NBCNews @AP @NewsHour @thehill @vicenews @Newsweek @nytimes @latimes @washingtonpost This is how you interview Trump! This is how to press Kellyanne, Sarah Huckster, the entire Republican establishment. Thank you, Mr Hasan, for showing us how it’s done! https://t.co/i32dTmPLFx

As Hasan himself later pointed out, he was simply “doing my job”.

But he did point out how other mainstream media outlets fail to do theirs, despite having access to hold the powerful to account:

And they've all blown it. Sigh.

Although as some highlighted, the state of today’s journalism means that a journalist holding a politician to account is regarded as news in itself:

Yeah, it’s not that hard people. Call bullshit when you see it. It’s that’s simple.

There was also an incredible irony that Hasan’s interview was commented on by the Hulk himself. Because the interviewee was called Steve Rogers.

Steve Rogers, of course, is the real name of Captain America in the Avengers:

Besmirching the good name of Steve Rogers, that one. pic.twitter.com/cWWEvcNyjS

A reference some people needed recognition for knowing:

Ruffalo is an unashamedly outspoken man of the left, supporting Jeremy Corbyn during the UK’s 2017 general election. He’s also joined campaigns against fracking in New York and denounced Israel for its operations in Gaza. This is all the more impressive from someone operating in a commercial environment adverse to controversy.

By contrast, other recent celebrity endorsements have been for questionable causes. From Kanye West praising Trump, to A-listers like Gerard Butler, and artist Pharrell Williams, supporting Israel’s enforcers of the Palestinian occupation: the Israel Defense Forces.

But ultimately, all Ruffalo did was retweet Hasan’s fine work. Holding the political class’s feet to the fire should be a given for journalists. Unfortunately, this is not the norm. Let’s just hope Hasan’s performance serves as a model for other journalists to follow.

– Support the Canary’s fierce journalism to hold the powerful to account.