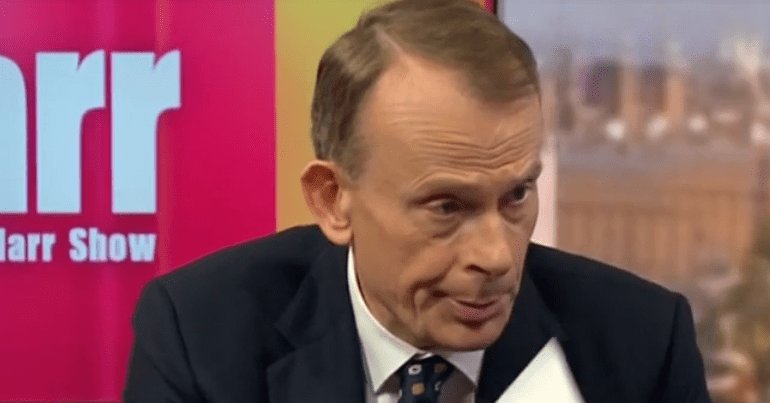 Establishment alarm over the existential threat of Jeremy Corbyn seemed to reach a new pitch on 18 November. Speaking to Labour’s shadow attorney general Shami Chakrabarti, Andrew Marr blew a gasket on his own show:

Andrew Marr loses his shit and reveals himself as another BBC bully boy. Shameful. pic.twitter.com/TLozKmrSAf

I can’t understand why you want to leave the EU.

I don’t want to leave… I campaigned to Remain…

I don’t know about you Andrew, but I’m a democrat.

Then Marr lost his cool:

Don’t try and patronise me, I’m as much a democrat as you are.

As the Conservative government’s foundations shake, the BBC seems to have stopped even pretending to be impartial. On 13 November, for example, BBC Newsnight host Emily Maitlis was accused of anti-Corbyn bias when she said to Conservative Dominic Grieve:

You’re going to fail the country on this one… and put Jeremy Corbyn in power.

The Conservative government is in a crisis of legitimacy, as Chakrabarti pointed out a little earlier on the show:

It seems to me completely unacceptable for the Conservatives to cram a second unelected prime minister without a general election.

With a no-confidence vote considered “likely”, May could be ousted as leader. But having lost its majority, the Conservative Party doesn’t have a mandate from the electorate to simply install another leader. On top of this, the Democratic Unionist Party (DUP) is on the verge of officially withdrawing its support for the ruling party. That means the Conservatives would no longer have the parliamentary arithmetic to govern.

#Marr is losing it. Constantly talking over Shami Chakrabarti but gets properly rattled when she schools him. The @bbc needs to start assessing the employment of right-leaning, institutionally sexist, middle-aged white political commentators called Andrew…

What on earth was this about? Intensely awkward to watch – although Shami Chakrabarti more than stood her ground. #marr https://t.co/YaOqkB4Bz5

Andrew #Marr getting flustered by Shami Chakrabarti because she's not the duplicitous intellectual lightweight he's used to interviewing. Speaking of which, here's Dominic Raab.

allows state intervention to invest in the regions and nations of this country.

May’s Brexit plan seems to adamantly enforce EU rules against state intervention. This is a crucial problem: the main difference between Labour and the Conservatives’ Brexit plans is the type of economy Britain will have after leaving the EU. If elected, Labour needs to be able to enact its manifesto, which includes public ownership of key industries, a renewable energy revolution and a huge social housing programme. For Labour, that’s how Britain really ‘takes back control’.

Fearing such fundamental social transformation, the establishment is in a state of alarm. With the autumn budget, the Conservatives have now ‘paid off‘ the DUP with a total of £2bn. And they still can’t make their circus of a government work. Stop prolonging the inevitable, and step aside.