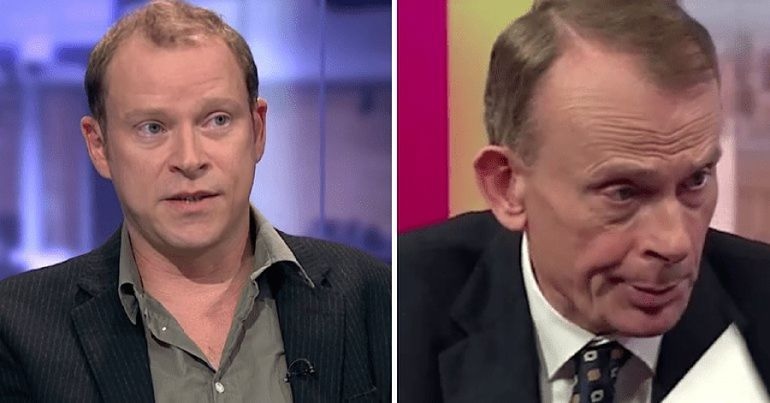 Peep Show star Robert Webb took down Andrew Marr after the BBC host ‘bullied’ guest Shami Chakrabarti on 18 November. Webb called the exchange a “flash of something nasty” and suggested Marr was “acting like a little boy who couldn’t get a date”.

The BBC presenter was speaking to Chakrabarti – Labour’s shadow attorney general – when he lost his cool:

Andrew Marr loses his shit and reveals himself as another BBC bully boy. Shameful. pic.twitter.com/TLozKmrSAf

In response, Webb spoke about when he met Marr:

Then, Webb stuck the boot in:

There are many examples of Marr, who’s reportedly paid £400,000 per year, giving the Conservative government an easy ride. For instance, Marr interviewed Theresa May in July shortly after her business minister had resigned – the fourth resignation that week. Yet the presenter didn’t even mention the resignation. In another interview with the prime minister, Marr did not challenge May on her so-called Brexit dividend – extra money the UK will supposedly have at its disposal after leaving the EU – which even official forecasts say doesn’t exist.

On Twitter, Webb – part of a comedy duo with David Mitchell – also called out the BBC‘s Andrew Neil:

Only a few days before, Neil faced accusations of sexism after he referred to journalist Carole Cadwalladr as a “mad cat woman”. Cadwalladr has been investigating criminality in the EU referendum.

Marr overstepped the line with Chakrabarti – a barrister and former director of human rights group Liberty. As Webb points out, Marr has managed to blend being the “softest interviewer” with selective outbursts.

But it’s important to note that some argue Marr has been promoted that far because he’s soft on the powerful, not in spite of that. The BBC is in close proximity to the establishment. For example, the government currently appoints national directors to the BBC board. Is it likely to appoint people with worldviews it disagrees with?

In a 1996 interview with Marr, renowned dissident Noam Chomsky put it best:

To be fair to Andrew Marr – you'd be permanently tetchy too, if you'd been Noamslapped as bad as this. pic.twitter.com/ByrIsqP3m2