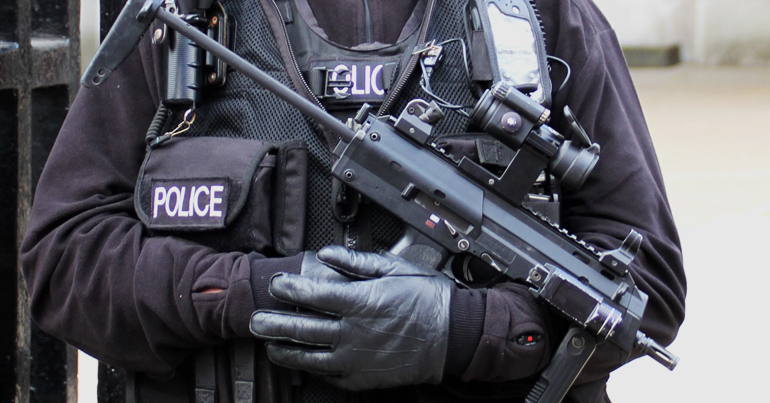 Police representatives have celebrated the opening of the Museum of Armed Policing. Once the news got out, though, the public’s reaction wasn’t quite so warm.

The consequences of carrying weapons… but only for the public

The Museum of Armed Policing, based in Chatteris, Cambridgeshire, had its grand opening on 17 November with the cutting of a police line:

This is not about glorifying guns, or armed police, we tell the whole story, we want people to understand the history behind where we are today.

Williams is also CEO of the Police Firearms Officers Association (PFOA). The museum is a project by PFOA, which the association said aims to “inform and educate on all aspects of armed policing in the UK”. Meanwhile, the BBC reported that a spokesman said its aim is to warn “young people about the consequences of carrying weapons”.

A PFOA description of the museum from February said it would have different “zones”, including:

And the BBC also said the museum contains a “virtual firing range”. The public can visit the museum from January 2019.

The museum has been welcomed by police representatives across the country:

Brilliant work by Mark and Debbie @pfoa_uk @museumarmpolice will be fantastic educational facility.

Looking forward to visiting on Saturday👍🏼

Honoured to have been invited to the opening of @museumarmpolice today & to support it with @cambsfederation. Excellent facility which will be so educational. It’s been alot of work but Well done to Mark, Debs & all @pfoa_uk for making it happen. pic.twitter.com/Uxpzf64GHt

Very proud to be attending the official opening of the @museumarmpolice with @PFEW_Che today. I know it’s been a labour of love for those involved in its creation, will be an honour to be there at its opening. pic.twitter.com/X49IuIVvyQ

Some brilliant work from the @pfoa_uk – we had the privilege of a sneak preview last month before the project was complete. It’s great to see the vision become a reality after years of hard work by the team. Well worth a visit. https://t.co/gHGfZvko5z

This will be an excellent facility for education and pretty exciting to have it based locally in Cambs. Hoping @CambsCops officers will get to pop in for a visit too as lots of interest. @museumarmpolice https://t.co/2jIEnVMvnE

Not everyone was pleased about the news though. Some questioned if the museum would reveal the whole history of armed policing:

Apparently the UK now has a Museum of Armed Policing. Does it have a "Jean Charles de Menezes botched operation" exhibit? 🤔 https://t.co/foLPfygCvv

Any mention of Mark Duggan or Jean Charles de Menezes in this celebration of armed policing?
Or are we expected to gloss over extra judicial police murders?

Does it have an 'RUC collusion with paramilitaries' exhibit?

The Network for Police Monitoring (Netpol) also suggested the museum’s stated aim may not be exactly on point:

This BBC report doesn't mention any of the innocent people the police have shot and killed, so we're assuming the museum is more "PR exercise" than "academic institution"https://t.co/a67JQ11ZJS

While others summed their reaction up in just a couple of words:

Armed policing is on the increase. In July, a Guardian article said operations were up 19%, to 18,746, across England and Wales in 2017/18. Simon Chesterman, lead on armed policing for the National Police Chiefs’ Council, blamed international terrorism and increased violent crime for the rise. Chesterman has also floated the idea of routinely arming officers on the street.

But high-profile armed incidents by police across the country makes routinely arming them a worrying prospect. The killings of Anthony Grainger, Mark Duggan, Jean Charles de Menezes and Azelle Rodney were mired in criticism, for example. Meanwhile, there have also been notable errors with tasers. These include Avon and Somerset Police tasering its own race relations adviser as well as a man with autism, and Sussex Police tasering a disabled father and son.

As a result, it’s not hard to see why a ‘museum’ for police with guns disgusts some people. The number of people shot and killed by police in England and Wales is lower than some other countries. But routine arming isn’t going to decrease that figure. We must confront any attempt to make this idea more acceptable to the public.

– Check out the United Friends and Family Campaign and Inquest, which support those affected by deaths in state custody.

– Read more about police at The Canary.