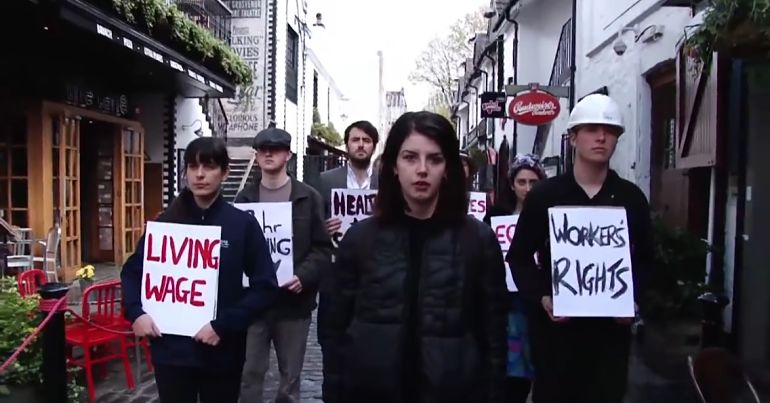 On 17 November, academic Dr Steve Garner took to Twitter to ask a question about his son’s new job. He was “horrified” about how his son’s new employer was treating him. And he asked if his son’s experience of working at a warehouse was “common”:

My son's new job: he gets up before 5 to walk 45 mins for 6.00 shift in a warehouse. No buses. So far he's been sent home 4 times out of 8 because they already have enough ppl. They don't call, just wait until he and other un-needed workers arrive. I'm horrified. Is this common?

Garner seemed to describe the reality faced by some workers on zero-hours contracts (ZHCs). So this tweet opened up the floodgates for people to talk about the reality of life on ZHCs in Tory Britain.

A report by the House of Commons Library describes ZHCs to be:

A type of contract used by employers whereby workers have no guaranteed hours and agree to be potentially available for work… They may be used by companies seeking labour flexibility and by workers seeking flexibility around their other commitments.

As reported by the Office for National Statistics, between October and December 2017, there were 901,000 people on ZHCs, which made up 2.8% of all employed people in the UK. And the workers employed on ZHCs tended to be “young, part-time, women or in full-time education”.

But ZHCs have a bad reputation for being exploitative, particularly in relation to income insecurity and on the employees’ mental health. Due to potential bad publicity, some businesses are reluctant to use them. Moreover, most political parties want ZHCs banned, or at the very least heavily regulated.

“It was incredibly insecure”

I can only recall my own circumstance whilst employed on a zero hours contract. I had recently finished my PhD thesis, when we found ourselves expecting the arrival of our son, Joe. I had no work, so had to find a job, any job, so took one as a casual worker. We received a text

notifying us of the availability of shifts, and had to call up to register our desire to work the shift. There were a number of limited positions, so it was a race against your colleagues to secure work on the shift. I would sometimes have two phones – a mobile and a landline –

and I would also ask my wife to ring from her mobile. And I would ring frantically, dialling, hanging up on the engaged tone, then repeat, until we got through. I couldn't make arrangements to go out with friends or to see my family, because the text could arrive only a couple

of hours before the shift. It was incredibly insecure, and contributed to my poor mental health. Owing to the state of my mental health, I've never made use of my degrees, and have been trapped in a state of underemployment ever since.

One reply mirrored the working arrangements described by Garner:

Very. My son had a job at a tourist type thing and they'd turn up and if it was looking like a quiet day they'd send them home, or wait until theyd worked a few hours and then send them home . Buggered their days, couldn't plan anything.

And another called it a “regression to the 1930s”:

Yes. Very common in warehouse distribution. Agency workers are turned away when they have a full quota for that particular shift. It's called progress when it's actually a regression to the 1930s. It's real & it's happening in 2018.😡

One Twitter user, meanwhile, asked why the BBC was not doing more to highlight this phenomenon:

But trade unions, pressure groups, and politicians across opposition parties are aiming to end this exploitation.

The “record high exploitation” must end

It's easy to conjure a "jobs miracle" if you legislate to allow businesses legally to crap all over workers. https://t.co/vykgGxZZNc

And the Green Party’s Natalie Bennett responded by saying:

From many people I've spoken to, sadly yes, it is common. As is now the lack of buses. https://t.co/X1VpvOCmN1

The reality of work in Tory Britain

In Tory Britain, the reality for those on ZHCs may reflect the experiences of Garner’s son. Therefore, it might be wise for those MPs in government to be more critical when congratulating themselves for low unemployment figures.

Maybe this Tory government should consider the quality of jobs for young people – rather than allowing and perpetuating these types of contracts. Whilst the government is at it, it should legislate a fairer National Living Wage for the young workers who are most likely to be on ZHCs.

Opposition parties must continue the fight to end this exploitation. At the same time, the Tory government should listen to the plight of young workers like Garner’s son and make work fairer for all.

– Join a trade union and fight against ZHCs.

– Support pressure groups like Better Than Zero and McStrike.

– Write to your MP to highlight this issues of ZNCs.