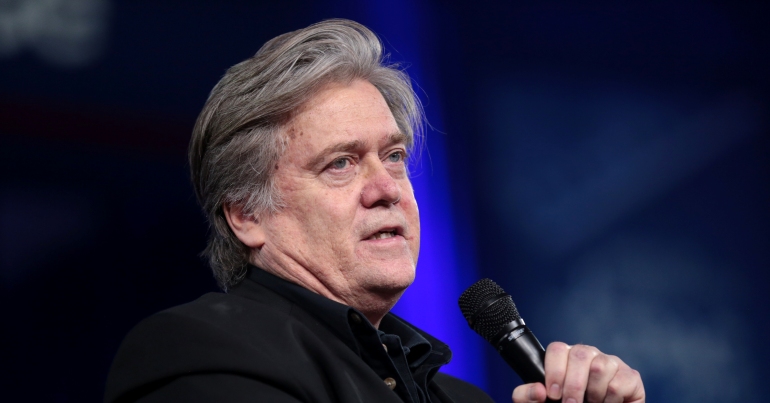 Just days later, someone painted a swastika on a community centre in Oxford. While there is no evidence linking the two events, it has led people to accuse the union of “normalising fascism”.

The event was only announced days before it was due to take place:

Cute to know that after Marine Le Pen, the @OxfordUnion claims Steve Bannon. Another occasion for Oxford students who can fork over £249.26 in fees to feel the thrill of "debating" the alt-right without having to rub elbows with the poor, and get a fun profile pic afterwards. pic.twitter.com/XuksBT03IY

The Oxford Union has just quietly press released the fact that Steve Bannon is speaking there in 2 days. Exactly two weeks after the leader of the AfD pulled out following widespread complaint. What the fuck is wrong with them? They're just 4Chan with plummy accents.

Despite the short notice, the announcement was followed by a great deal of opposition online due to Bannon’s openly racist rhetoric:

Steve Bannon is a white nationalist who told the French National Front to "let them call you racist…wear it as a badge of honour." He is whipping up hate & division. This might be a game to those running the Oxford Union, but this invite only serves to further Bannon's cause. https://t.co/OVT8R1OxxV

Oxford Union’s response, however, was to quote Bannon comparing Black Lives Matter and anti-fascist protesters to the KKK:

The official (and verified) Oxford Union Twitter account is uncritically quoting Steve Bannon as he equates "Nazis and the KKK" with "Antifa(scists) and #BLM" (Black Lives Matter); essentially saying the latter pair should not be opposing fascism in its various forms. pic.twitter.com/XAiiRJfmPR

Even the university’s own student union objected to the event:

We are concerned that the Oxford Union has decided to give a platform to Steven Bannon and his views. His hateful ideology has no place in Oxford and as an SU we actively condemn hate speech.

Of course, students and activists in Oxford were not going let the event take place unhindered, and protests caused considerable disruption on the day:

"Stop inviting fascists, you dickheads"
Unbelievable numbers of people blocking Steve Bannon at the Oxford Union right this second, after cancelling their visit from the AfD leader only 2 weeks ago due to the widespread complaints
When will they learn? pic.twitter.com/CP0jHnFuqB

Some people questioned whether the opportunity to ‘challenge’ Bannon is worth giving him a platform. This gem at the protests makes it clear why opposition is needed:

These two men Nazi saluting us as we block in a Union back entrance #bannon #oxford pic.twitter.com/1XClfv84g0

But it doesn’t end there. Just days after Bannon spoke, someone painted a swastika on a community centre in Oxford:

“Fascists aren’t *in* Oxford, they came and left with Bannon.” pic.twitter.com/v8YpQKhmbM

While there is no evidence of a direct link between the graffiti and Bannon’s speech, many people felt the union should take responsibility for the incident:

SWASTIKAS ON OUR STREETS: this is the result of @OxfordUnion inviting Bannon to Oxford. RT if you agree: Oxford Union President @sjhorvath, who forced the Bannon visit through, should go out today and personally paint over it! https://t.co/wwodBFsyL9

Oxford Union should be help responsible after platforming Bannon. This is the beginning of predictable outcomes of normalizing fascism.

.@OxfordUnion https://t.co/p98HMzZ1uq this is the sort of thing you're helping to normalise. Absolutely disgusted.

Oxford Union is unrepentant over hosting Bannon. It has uploaded a video of Bannon’s full talk on YouTube, and continues to call itself “The last bastion of free speech”.

The privileged few who get to go to Oxford, and join an exclusive club like the Oxford Union, have the luxury of hearing out fascist views. Because, after all, their privilege often protects them from the very real consequences of Bannon’s ideology.

– Join the Reclaim the Fight: Feminists Rise Up Against Fascism demo on 25 November in London.