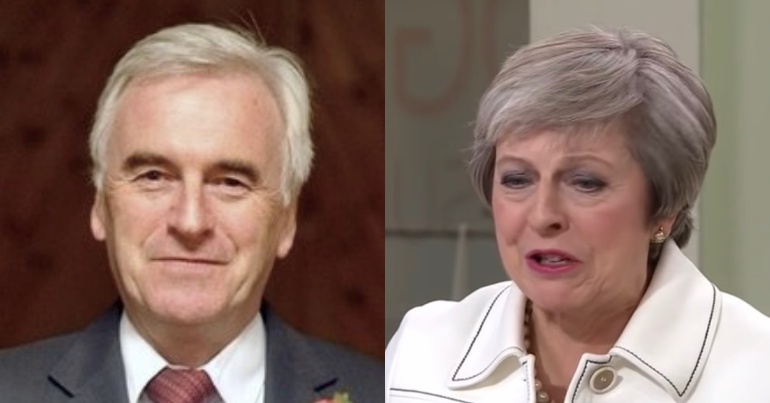 On 19 November, key amendments on the autumn budget came up for debate in parliament. For the first time since signing a Confidence and Supply Agreement with the Conservatives, the DUP didn’t back the government. It’s a clear warning that it won’t support Theresa May’s Brexit deal. And in response, Labour’s shadow chancellor John McDonnell nailed the situation. It very much looks like this Tory government is going down.

“We no longer have a functioning government”

Following the votes, in which the DUP abstained on several key amendments and voted in favour of one, Labour’s Jon Trickett stated:

We no longer have a functioning government.

And in response, McDonnell signalled that this could, indeed, mean the end is nigh for the Tories:

Constitutional custom and practice in this country dictate that if a party in government cannot command a majority in Parliament it should stand aside and allow the opposition party the opportunity to seek to form a government. We are now clearly moving into this territory https://t.co/4peHcT5pCv

In a statement to the BBC, the DUP’s Sammy Wilson said that this decision had been carefully considered. But it felt the government had “broken” a “fundamental” agreement and it wanted to:

send a political message to the government… we’ve got an agreement with you but you’ve got to keep your side of the bargain, otherwise we don’t feel obliged to keep ours.

Sammy Wilson from the DUP has a message for the government: "You’ve got to keep your side of the bargain, otherwise we don’t feel obliged to keep ours" #newsnight | @nicholaswatt pic.twitter.com/Hz9lB6q5T4

Without the DUP’s ten votes, May has a minority government.

Since the DUP votes, there’s been much speculation about what this means for the government. As some people pointed out, this is a ‘violation’ of the Confidence and Supply Agreement:

Key part of the DUP-Tory supply and confidence three-page document from after the election. DUP seem to have violated this key passage this evening. pic.twitter.com/2YpbYIly3P

Others have suggested that the DUP may push this further since they’ve not yet drawn the full £1bn allocated following the 2017 general election:

As the DUP has been helpfully tweeting, £570m of the confidence and supply deal with the Tories is still unallocated / yet to be drawn down, according to this Commons note pic.twitter.com/4acVlAXVyw

Meanwhile, some people think that May will continue acting as though none of this has happened:

Supporting the government on Budget votes is a major part of the Tory/DUP confidence and supply arrangement. The DUP just abstained. Knowing Theresa May she’ll tell us “nothing has changed” and the country will continue to go to shit as she does all she can to cling to power.

They may have a point. Because in a speech given on the same day as the budget votes took place in parliament, May’s speech certainly indicated that she’s completely unaware of the Brexit chaos around her.

May has drawn widespread criticism for comments made in a speech to the Confederation of British Industry (CBI). She said that, after Brexit, EU nationals can’t “jump the queue ahead of engineers from Sydney or software developers from Delhi”.

But behind this comment, May also used her speech to say that the terms of the UK’s withdrawal from Europe had been agreed. Eight times. Most surprisingly, she said:

Last week the Cabinet agreed the terms of the UK’s withdrawal from the European Union.

Yes, it was agreed at a cabinet meeting on 14 November. But the following day, two cabinet ministers and five other ministers resigned, saying that they could and would not support it. Did she not notice?

May’s CBI speech suggests that she’s wilfully ignoring the reality of the situation. Her leadership, and indeed the whole Tory government, is crashing down around her. The DUP has stated that it will “of course” vote against the Brexit bill. So May doesn’t have a majority in parliament. Trickett’s right, we don’t have a functioning government at the moment. Indeed, many people feel that we’ve not had one for years. But May really should heed McDonnell’s words, because we’ve moved into new territory.

Get the popcorn; the Tories are going down.

– Firstly, join the fight against the root causes of today’s problems – austerity, and cuts. Join a union, activist group, and/or political party to make your voice heard.

– Join or support a co-operative. Also find out more about the ‘solidarity economy‘ – “a grassroots economy built by the people, for the people, and the planet” which “embodies the values of economic and social justice, diversity and pluralism, co-operation, self-management, and ecological sustainability”.