Police taser an autistic man claiming he assaulted them. The CCTV tells a 'rather different' story. [VIDEO] - Canary 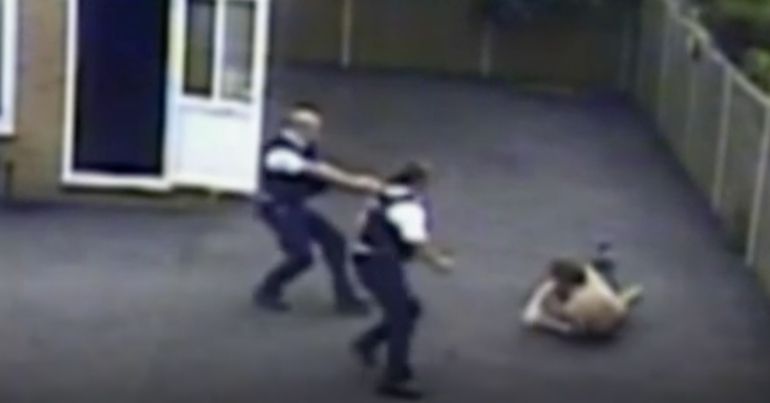 Police officers in Bristol arrested and tasered an autistic man. The man was charged with assault. But the prosecution collapsed after CCTV footage revealed the officers had told a “rather different” story.

Yet, while an investigation by the Independent Police Complaints Commission, now known as the Independent Office for Police Conduct (IOPC), found “inaccuracies” in the officer’s accounts, it didn’t think that the officers should face misconduct proceedings.

Police were called to The Laurels, a supported housing unit, after a window was cracked. According to one of the officer’s statements, the man pushed one of the officers “double-handed in the chest with open palms” and the officer “stumbled back two foot” before the Taser was deployed.

The man was arrested and charged with assault. But the case collapsed after his mother discovered the CCTV footage and gave it to the Crown Prosecution Service. The prosecutor, Kevin Withey, stated the footage:

shows an incident rather different to that described in the statements of the PCs.

And the footage does indeed show a somewhat “different” picture:

The man’s mother is adamant about the consequences had the footage not been discovered:

If [he] had been found guilty on the basis of their evidence, he would have been sent to prison.

But while the IOPC investigation found there were “inaccuracies” in the officers’ statements, it was not misconduct. The IOPC also found that the actions of the officer who failed to recover the CCTV “fell below the standard expected”.

Superintendent Richard Corrigan, from Avon and Somerset Constabulary, described the arrest as “necessary”. He further stated:

The IOPC identified a performance issue relating to a separate officer in relation to securing and preserving of CCTV evidence in connection with this case and a management plan was put in place to address this issue.

Unfortunately, inaccurate information about the assault on an officer was initially given to the Police and Crime Commissioner. The IOPC concluded this mistake had no influence on the way we dealt with this case, but we’d like to apologise for the error.

But despite incidents like this one and the case of Judah Adunbi, a race relations officer, who was tasered over a case of mistaken identity, police chiefs are calling for all officers to be issued with Tasers. Speaking to The Canary, Kevin Blowe, coordinator of the Network for Police Monitoring stated:

If the Home Office buckles under pressure to provide every officer with a Taser, we will see many more of these incidents. When the police are given the ability to use violent tactics with impunity, they seem eager to use it, backed by union representatives who insist any suspect is potentially dangerous and force is therefore always in the public interest.

And Blowe also put the incident in a wider context:

As alarming as the Taser incident itself was, this case also raises concerns we hear from people all over the country: about wrongful allegations of assaults on officers, prosecutions based on one-sided evidence and complaints that are inadequately investigated.

These police officers may not be facing misconduct proceedings. But this raises questions about the threshold for police misconduct. These officers made “inaccurate” statements and failed to preserve vital evidence. It’s no wonder that so many people are not only losing trust in the police but in the bodies that are supposed to hold them to account.