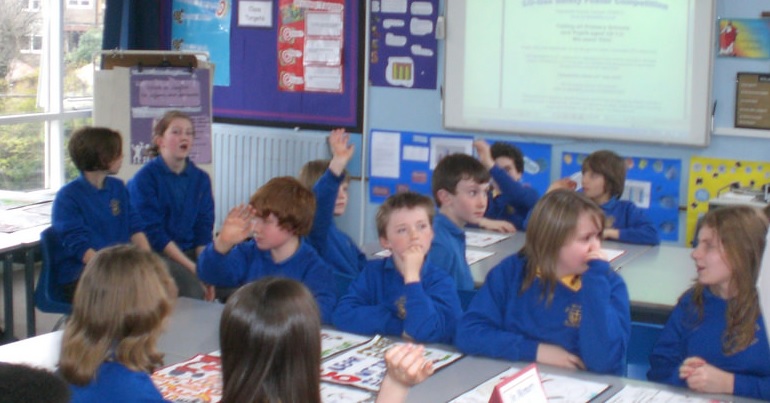 Arms dealer BAE Systems chose the worst time to boast about its project with primary schools. And people who spotted its bragging on Twitter were quick to point out why.

BAE Systems Air revealed that a primary school attended workshops at the company’s Academy for Skills and Knowledge on 30 January. It posted an image of the children on Twitter, saying it was “delighted to welcome” them in:

BAE opened this academy in 2016. The defence company trains apprentices and employees at the site. But the academy also has a “Education Station” for visiting school children. According to BAE’s website, the aim of this station is to “inspire” children to think about careers in science, technology, engineering and maths (STEM).

There’s something very disturbing, however, about seeing BAE staff looking on approvingly as small children seemingly present what they’ve learnt from the weapons giant to the rest of their class (they’re also standing in front of an image of what appears to be a military aircraft which does nothing to quell such discomfort). As commentators explained in response to the tweet:

Sad to think that kids this age are being killed by BAE Typhoon fighter jets in Yemen.

Since 2015, Saudi Arabia has been carrying out a brutal military campaign in Yemen. In September 2017, the UN documented that 1,184 children had died in the conflict. Over eight million Yemenis, including children, are also on the brink of famine. Yet BAE Systems has continued to send its Typhoon fighter jets to Saudi Arabia during this conflict, as part of a deal agreed in 2007. And it’s even trying to secure another deal with the country to sell more warplanes.

BAE Systems is a company that profits from war, conflict and oppression around the world. It has armed and supported regimes with appalling human rights records and been all too happy to pour weapons into war zones. I doubt they mentioned any of these things to the children they were trying to win over.

Schools are learning environments, they should never be propaganda vehicles for arms companies and those that profit from death and destruction. Companies like BAE should never be welcome in classrooms, and should not be given these kind of opportunities to try and normalise their terrible business.

The Canary approached BAE Systems for comment. It said:

As a business we invest over £90m each year in education and skills activities across the UK and have a proud history of developing early careers. We’ve a long-standing commitment to working with governments and academia – including schools – to address the shortage of skills in the UK and engage with young people to help build their awareness of the broad range of career opportunities from STEM subjects, especially highlighting engineering as a possible career choice for girls. We’re committed to delivering high quality apprentice and graduate schemes that are designed to make sure more young people have the right skills for the future.

The problem with BAE’s investment however, is that as Smith suggests, it’s training children in destruction. But science, technology, engineering and mathematics can be taught and used much more constructively. These children, for example, could learn how to create the clean energy they need for their – and the world’s – future.

Instead BAE Systems is ‘normalising’ a business that is killing these kids’ peers overseas. That’s not the sort of building block any child needs.

– Take action against the arms trade with CAAT.

Featured image via the Liberal Democrats/Flickr