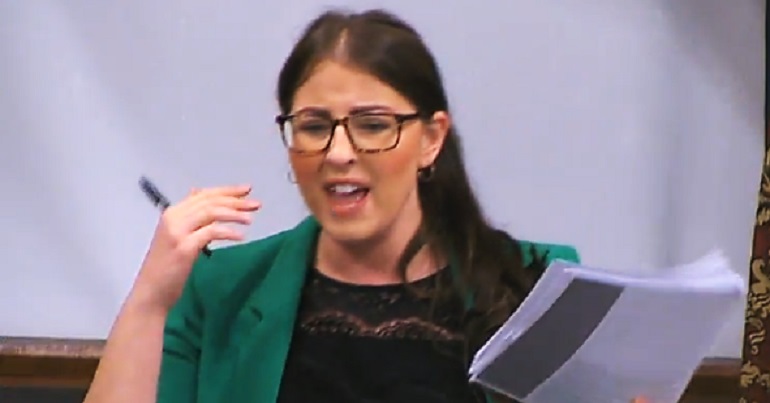 Just before Prime Minister’s Questions (PMQs) on Wednesday 31 January, another parliamentary debate took place. And the evidence given, along with the attitude of the Conservative MPs present, was staggering.

“Astounded” by the government’s “alternative reality”

Labour MP Laura Pidcock had organised a debate on Personal Independence Payments (PIP). And at the end, she furiously concluded that the government’s “alternative reality” “astounded” her:

But what caused Pidcock to become so incensed? Well, it was Conservative MPs’ responses to the stories they heard about disabled people’s lives.

A benefit dogged by controversy

PIPs from the Department for Work and Pensions (DWP) are for sick and disabled people. The benefit was rolled out gradually in 2013 to replace the Disability Living Allowance (DLA).

But ever since, PIP has been dogged by controversy. This includes the UN saying the government must “repeal” changes made to PIP in 2017; an argument the High Court agreed with just before Christmas and one on which the DWP has now backed down. It says it will be reviewing the PIP cases of 1.6 million claimants.

The room had been listening to MPs tell the stories of their constituents affected by the PIP process. Like Labour’s Laura Smith, who spoke about George.

Smith said he lived with a “range of debilitating conditions”, was on “a huge amount of medication just to get through the day” and relied on a wheelchair. She went on to explain how George used to get DLA, but after the PIP process to test whether “he was disabled enough” he lost his benefits:

Then there was the constituent whom the DWP said was not entitled to PIP until December 2017. By which time he would probably be dead:

But for the Conservatives present, these stories were just “scaremongering”.

Take former Parliamentary Under-Secretary of State for the DWP and Disabled People, Justin Tomlinson. He defended the government’s approach to PIP. He said it was not about saving money, as the government was spending even more, and that more people were getting the highest rate of support:

This is not entirely true. Because when PIP was rolled out, the then-Coalition government said it was to save money; that the change would reduce costs by 20%.

Also, government figures show [pdf, p8] that between October 2013 and October 2017 nearly half of the people (46%) who previously had DLA either lost money or had their claims stopped altogether under PIP. This equates to nearly half a million sick and disabled people losing out.

But never mind. Another Tory said Pidcock should give a “little bit of balance” when talking about PIP. But she was having none of it:

It was, though, perhaps DWP Minister Sarah Newton’s concluding remarks which were the most staggering. She spoke (somewhat condescendingly) of how she would “encourage” MPs to visit their local Jobcentres to meet the “highly motivated” DWP staff doing “excellent work”.

Newton also said it was Conservatives who helped create the Welfare State in the UK, and that she and fellow Tories were “just as passionate about making sure we have the best possible support” for sick and disabled people.

And then she said that by raising the genuine concerns of disabled people, opposition MPs were “denying your constituents an opportunity to benefit from PIP”:

In the past 20 months the UN has declared that successive Conservative-led governments created a “human catastrophe” for disabled people, and then tried to cover it up. And that was after it said the government had committed “grave” and “systematic” violations of disabled people’s human rights.

As Pidcock said in the debate, the Conservative government presents an “alternative reality” when it comes to the lives of disabled people. And the despicably arrogant and sneering displays from the Conservatives present compounds the view that they simply do not care.