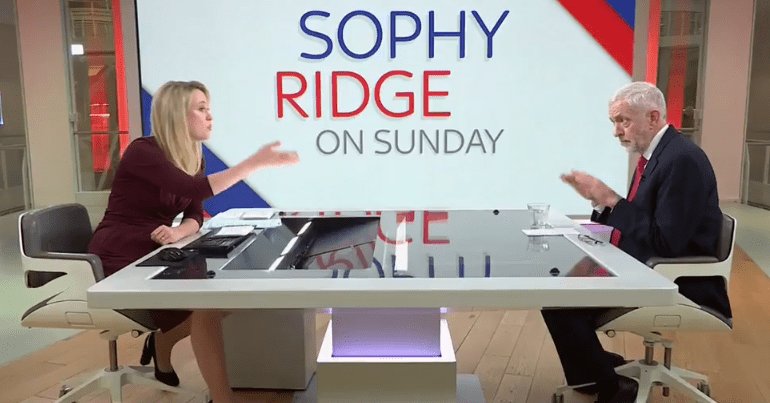 Speaking to Sky’s Sophy Ridge, Jeremy Corbyn blasted through the propaganda and spelt out his personal position on the EU:

Ignore the media bullshit. Speaking to #Ridge, Corbyn breaks down his long-held, personal view on the EU: pic.twitter.com/Iw9daFYxcG

Ridge questioned Corbyn on his “personal” views about the EU:

You voted to leave the European Economic community in the 1975 referendum. You opposed… the Maastricht treaty.

The BBC, for example, has been reporting that Jeremy Corbyn is unquestionably an ardent Brexiteer. But Corbyn’s position seems to be more nuanced than that. Responding to Ridge, the Labour leader said:

I opposed the Maastricht treaty because it was bringing in an unaccountable central bank and it was moving in the direction of a free market Europe… By parallel, I strongly supported the social measures that was brought in by the European Union which Mrs Thatcher so strongly opposed… And actually I’ve probably spent more time meeting European socialist parties than any other Labour leader ever has.

The Maastricht treaty of 1992 established the European Central Bank (ECB) and laid the groundwork for the Euro. Corbyn seems to oppose the ECB and the Euro because the bank removes the monetary self-governance of Eurozone nations. That was made all too clear when the ECB rejected Italy’s budget in October 2018. The EU has now imposed counterproductive austerity measures on multiple member states.

On Sky, Corbyn continued to outline his position:

I’ve always been in favour of social cooperation across Europe, I’ve always been in favour of better workers’ rights. I strongly supported the whole social chapter agenda that was brought in, in the European Union. What I opposed was the development of free market economics in Europe, what I opposed was the state aid rules which limit to differing extents the ability of a government to intervene on its own economy, like we would want to…

By contrast, May’s Brexit deal seems to adamantly enforce EU rules against state intervention. This is a crucial problem: the main difference between Labour and the Conservatives’ Brexit plans is the type of economy Britain will have after leaving the EU. If elected, Labour needs to be able to enact its manifesto, which includes public ownership of key industries, a renewable energy revolution and a huge social housing programme. For Labour, that’s how Britain really ‘takes back control’.

Ignore the propaganda. Corbyn is clear about his position on the EU, which reflects his view on the UK: the Labour leader wants to regulate money, not people. And a glance at Italy and Greece shows his concerns about EU monetary and fiscal policy are not unfounded.