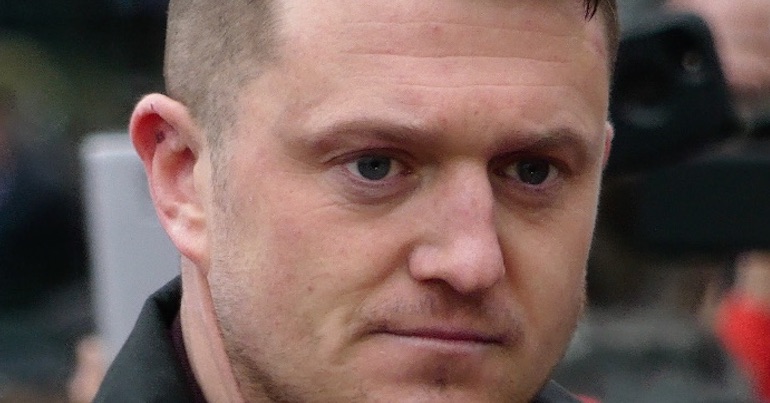 After a heartbreaking video of a child brutally attacking a Syrian refugee in Huddersfield went viral, Stephen Yaxley-Lennon (aka ‘Tommy Robinson’) wasn’t far behind. As The Canary previously reported, the alleged attacker frequently shared Yaxley-Lennon’s posts on social media. And the latter then waded in to support the attacker, sharing fake news in the process.

Yaxley-Lennon is currently trying to rebrand himself and creep closer towards mainstream politics daily. But we mustn’t let that happen. Because he spreads hate speech – pure and simple. And a new video proves this once and for all.

The truth he’d rather you didn’t see…

On 9 December, a collective of 19 anti-fascist and socialist groups have organised a counter-demonstration in London. As UKIP and Yaxley-Lennon “march with their racist far-right circus”, thousands of people plan to oppose “everything the far right stand for”.

Momentum is one of the groups involved, and it issued a video to highlight all the vile, racist hate speech he’s spewed out along the way:

Take a stand against the new far right this Sunday: https://t.co/w8WGv7d88T pic.twitter.com/pOXEJrjSvr

Yaxley-Lennon continually denies spreading hate speech. Yet in his own words, he’s called Muslims “enemy combatants… who want to kill you, maim you and destroy you”, and accused Muslim men of “raping their way” through the UK. He also called the refugee crisis “an invasion of Europe” by “barbarians”.

Do we need to go on?

When will he just fuck off?

Millions recently witnessed Yaxley-Lennon’s vile ideas about refugees played out by a child in school uniform against a child refugee. And Novara Media‘s Ash Sarkar summed up many people’s disgust with him by calling him a “sentient fungal nail infection”.

But there’s a ticking clock under his latest efforts to gain public support. Because he’s manipulating the current Brexit chaos to push his bigoted message about Muslims.

Tommy Robinson is a racist, a fraud, and an absolute wasteman.
Join us on the 9th of December to oppose his toxic politics and inability to dress himself properly.https://t.co/ty5xRGHWLF pic.twitter.com/qbJHIIuhsS

There’s no way to deny it. Yaxley-Lennon spreads dangerous hate speech. And lots of people are asking the same thing: when will he just fuck off?

The answer? He won’t fuck off until we take a stand against him and make sure everyone knows what a hateful, divisive liar he really is.