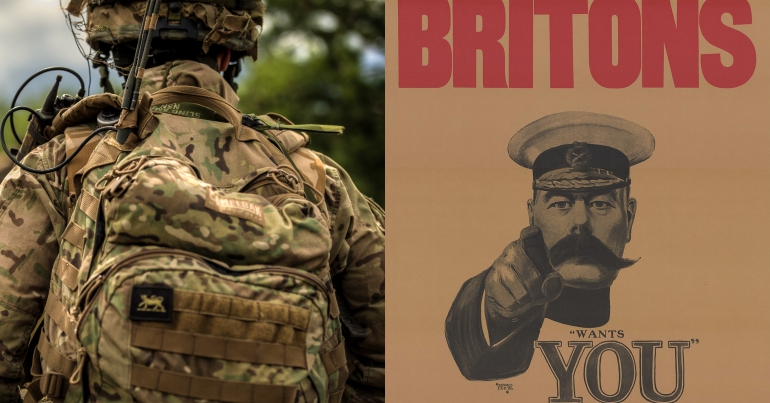 The army is starting 2019 with a recruitment drive. A series of images based on the classic World War 1 poster calls on “millennials”, “snowflakes”, “phone zombies”, “binge gamers” and “selfie addicts” to enlist.

But it seems no one is impressed.

Many social media users pointed out that insulting people isn’t really the best tactic to deploy when trying to get them to work for you:

Not sure why the British Army thinks insulting young people is a good recruitment tactic. What an awful campaign. pic.twitter.com/5DjI4GHVPq

The British Army recruitment drive for millennials 🤔 . Stereotyping and patronising on a whole new level!! Do they really think we are that gullible 😂😂 pic.twitter.com/bFLeNK8VYx

Another social media post summed up the general reaction:

The reality of war

Meanwhile, other Twitter users pointed out the reality of joining the army:

The new army recruitment ads are so stupid. Stop playing on your games snowflakes and come and murder innocent civilians in countries we have no business being in. Fucking politics, no glory.

Another person highlighted the “chilling” underlying message of the posters:

One who does not know how chilling it is for any army to reuse the style of its recruitment posters from the First World War! They might as well put on the bottom: 'come in your millions to be sacrificed because we can think of no strategy except wasting the lives of oiks'.

This campaign comes amid more and more people protesting militarism. Writing in Left Foot Forward, Symon Hill from the Peace Pledge Union celebrated record numbers of people taking action in 2018. This included record sales of white poppies and that “Armed Forces Day events were met with protests in more places than at any time since the Day was introduced in 2009”.

Militarism is a class issue, with the army targeting the poorest and most disadvantaged young people for recruitment.

No one is happy

But the campaign didn’t just miss the mark with millennials. Even those supportive of the army weren’t happy:

So glad I finished my service before all this Bollocks, I left when the Army was still "The Army" .
It's now a safe haven for all the dregs of society
The frightening thing is, they expect these people to go into battle if needed pic.twitter.com/qxwBmx5Ijg

New British army recruitment posters are embarrassing the whole thing is. Even the bloody raf and navy look better than us. What a joke.

And it was further pointed out how strange the recruitment drive is given the number of cuts the army has been forced to make in recent years:

This new push for British Army recruitment is socially fascinating: they've cut troop numbers to a massive degree, and have far more people trying to join (recession always helps) than they need- they just don't want most of them. …

The army is trying to show it is looking beyond usual stereotypes in its recruitment. It appears to have failed with this disastrous marketing campaign. But perhaps this is a good thing. Because usually military recruitment, as Hill points out, preys on poor and disadvantaged people, promising adventure and escape rather than killing, out-of-date equipment and lack of care for veterans.

So the fewer people fooled by military propaganda, the better.