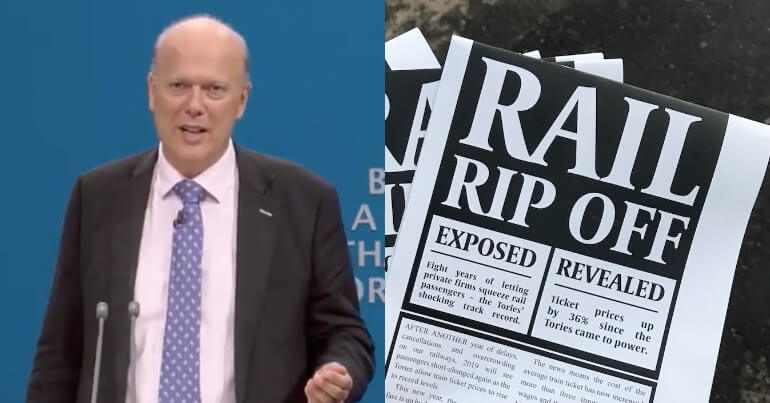 Transport secretary Chris Grayling is blaming trade unions for the rail fare increases after unions demanded staff get a well-deserved pay rise. But Grayling’s attack on workers conveniently leaves out the huge pay increases for rail bosses and ignores the shareholders raking in a billion pounds’ worth of dividends.

Rail fares increased by an average of 3.1% on 2 January in what Railfuture describes as another “yet another kick in the wallet” for passengers. This is on top of the 3.4% rise early last year and a rise every year since 2010.

Research by Labour using 180 train routes showed the average commuter will now be forced to pay £2,980 for their season ticket. This is a £786 increase from 2010. As The Canary has previously reported, weekly earnings have stagnated since 2008, with real wages lower than they were 10 years ago. This means that average fares have risen almost three times faster than wages. Fares have risen faster than wages nine times in the past 10 years.

In response to backlash about the rising rail fares, Grayling told Radio 4:

But the reality is that it’s not workers who are responsible for the rises, it’s the fat cat shareholders. According to the TUC, private rail companies have paid out over £1bn to shareholders over the past six years. This year alone, Virgin Trains and Stagecoach paid £51.2m worth of dividends to shareholders from the West Coast mainline railway. This was just after collapsing the East Coast line and costing taxpayers up to £2bn. Rail bosses have also seen a 6% pay increase despite the worsening services and timetabling chaos.

The most reliable thing about our railways is the cash that goes to private shareholders each year. But with the most expensive fares in Europe, that can’t be right. It’s rewarding failure and taking money away that should be invested in better services. It’s time to take the railways back into public hands. Every penny from every fare should go back into the railways. The number one priority should be running a world-class railway service, not private profit.

O’Grady is spot on about “rewarding failure”, but just how bad are our privatised railways?

One in seven trains were delayed by more than five minutes during 2018 up to October. With trains clocking up a shocking 32 years’ (283,904 hours) worth of delays. Delays have increased by 22% since 2008/9 despite 10% more trains running.

The train staff Grayling attacked are severely stretched due to understaffing and this contributed to huge delays last year. Lack of staff caused 25,335 hours of delays, even beating weather delays which stands at 18,907 hours.

People have had enough

What this shows is a damning indictment of a failing, greed-driven privatisation model which is unfit for use, and people have had enough. Huge protests arose at railways on 2 January with both commuters and staff expressing their frustration with the extortionate price increase. Jeremy Corbyn was amongst the protesters, branding the increases as a “disgrace and a shame“.

Labour is calling on the government to renationalise the railways and to freeze prices on the worst performing routes. Shadow chancellor John McDonnell says under Labour railways could be renationalised within five years, and can be ‘cost neutral’, resulting in increased investment, better services, and reduced passenger fares.

Unfortunately, the Conservatives will always prioritise profit over people, and it’s the many who will suffer to line the pockets of a few. That’s why it’s more important than ever to join the campaigns, make your voice heard, and demand real change.