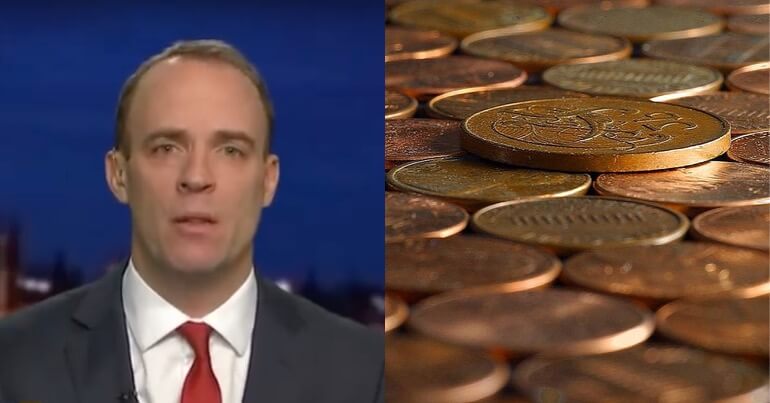 Amidst the mayhem of the no-confidence vote, Dominic Raab took to Twitter to boast about the government’s real wage statistics. However, the bizarre brag severely backfired, as the statistics showed that real wages are lower than they were 10 years ago.

However, the ONS infographic proved that real wages are lower than they were 10 years ago.

The graph shows real wages were around £515 a week under Labour in 2008. 10 years later, under a Conservative government, average real wages are £495 a week. The graph also shows that the fastest growth since his government took over was actually from 2014-2016 with the past two years showing that weekly wages have barely increased at all. Despite this glaring indictment of his government’s failings, Raab says these figures are “good news”.

Meanwhile, when you look at this same graph from 2001 under Labour, the Conservatives’ ‘real wage rise’ looks significantly less impressive.

Twitter users berated the bizarre brag, with many dumbfounded at Raab’s apparent cluelessness:

Can @DominicRaab genuinely be that innumerate? This graph shows nothing of the sort. This would be a relatively easy GCSE maths question.. https://t.co/6ct49OdeQV

This graph literally shows that real wages are lower than when your lot came into government in 2010. Not really something to be boasting about.

While we can laugh at Raab for his naive boasting, this highlights a serious problem. People have been worse off for 8 years now. The facts are simple. Under consecutive Conservative-led governments, the cost of living has increased, wages have gone down, and millions are being pushed into poverty. Radical changes are needed. With the Conservatives slowly imploding and the prime minister barely hanging on, this might happen sooner than we think.