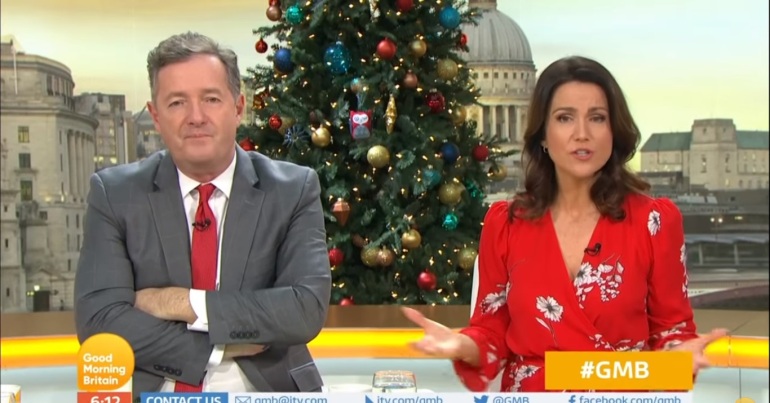 It’s been quite the week for Piers Morgan. On 11 December, the Daily Mail published an article in which the opinionated TV host expressed an interest in becoming Donald Trump’s chief of staff:

In a Daily Mail op-ed, @piersmorgan basically wrote to Trump: Hire me to be your next chief of staff.

I think I speak on behalf of everyone who has "Knock-Down, Drag-Out Oval Office Fist Fight" on their official Shit Show BINGO card when I say: Yes. Please hire Piers Morgan. pic.twitter.com/qfeXD7YaJx

His somewhat desperate appeal to Trump was followed by a discussion on the possibility that he may be leaving his slot on ITV’s Good Morning Britain. The reaction was, well, as you might expect:

I can’t think of a nicer man on which to inflict Piers Morgan.

In an open letter to Trump, Brit twit Piers Morgan lists 10 reasons why he should be the White House Chief of Staff, including "You need someone who will look you in the eye and tell you when you're being an idiot."

Clearly no one has ever offered this service to Piers.

Meanwhile, with so many of Trump’s former staff members now facing criminal proceedings, the prospect of Morgan facing the same fate seemed to appeal to a lot of people:

So many Trump aides are now actually in prison. Truly, the arc of the moral universe is long, but it bends toward justice…

Piers Morgan is a criminal who should be in jail, so he'll fit right in at the White House https://t.co/2qaIj6ZjiY

@piersmorgan is considering leaving the UK for a job with @realDonaldTrump is this because Donald is going to need a cell mate. #dreamcometrue

What with Piers Morgan going to work for Trump, we can all be happy. https://t.co/eqHM9G50dO

Woke up to the news that along with Sugar, Piers Morgan is planning on offing himself to the states! They should run a bus, a one-way one, with enough space for Tony n Tommy Robinson, Hopkins, Dan Hodges, Maugham + a dozen others. I'll organise the bunting + jelly n ice cream 🤗

Morgan might, in fact, be a good candidate for the job of White House chief of staff. He appears to be quite the cheerleader of Trump, after all. Ironically, though, when he has been criticised in the past for his lack of impartiality with regard to the US president, he didn’t take it too well:

Earlier this year I was criticised on @GMB by @susannareid100 and hounded off air by @piersmorgan for questioning the latters journalistic integrity re. Trump

Now Piers wants to work for him. Chumminess of the media and political right is an issue, here and in the US pic.twitter.com/QZdIA6my3L

It appears, for a lot of people, the prospect of Morgan leaving the UK felt like Christmas come early. But their hopes could be dashed. It seems he may be still considering staying in the UK. Bah humbug.