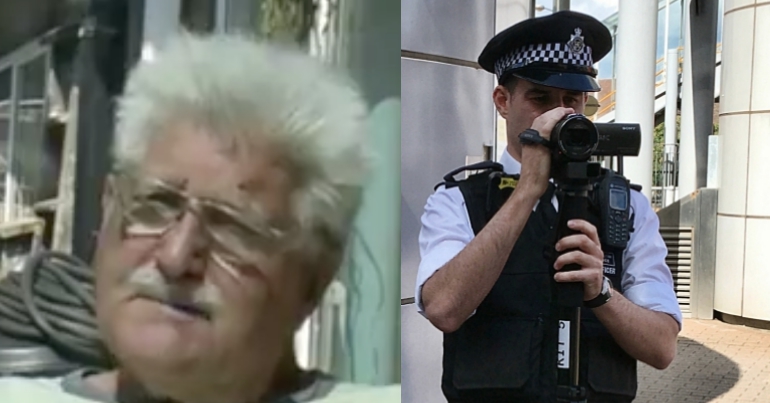 In 2012, John Catt began a legal battle over the police’s domestic extremist database. Catt, who attended many protests but had no criminal convictions, found that the police had kept information about him on 66 occasions.

A seven year battle for justice

Catt regularly attended protests by the anti-militarist group, Smash EDO. Described by the police as “violent”, the group aimed to shut down an arms factory in Brighton.

But there was no suggestion that Catt took part in any criminal acts. In fact, he was often seen sketching at protests, something the police noted in their reports:

John CATT arrived in his white Citroen Berlingo van. He removed several banners for the protesters to use and at the completion of the demo returned the same to the van. He was using his drawing pad to sketch a picture of the protest and the police presence.

Catt’s initial case was heard in the high court – where he lost. He then won in the court of appeal before losing again in the supreme court in 2015. Determined for justice, he then took the case to the European court. And seven years later, he has won the case.

Shamik Dutta, Catt’s lawyer, wrote a series of tweets about why the case is so important:

By 2010 John discovered police had retained 2 photos of him & 66 written database entries about his lawful participation in protest. These were stored on the police “domestic extremism database”. The entries logged what John was doing, what he was wearing, who he was speaking to.

Tomorrow we discover whether the European Court of Human Rights will agree that it is unlawful for police forces around Europe to put you on a searchable state database simply because you challenge the government, stand up for human rights and express your opinions in public.

The ECHR was unanimous in finding that Catt’s rights had been violated. It stated that while the police were able to collect the data, it was not proportionate to retain it. It also highlighted the lack of “safeguards” regarding sensitive and protected data about people’s political opinions and trade union activity:

The absence of effective safeguards was of particular concern in the applicant’s case as the personal data retained revealed political opinions which attracted a heightened level of protection.

The court was also critical about the police’s use of the term “domestic extremism”:

the Court considers that there was significant ambiguity over the criteria being used by the police to govern the collection of the data in question. It notes that perhaps as a result, the database in issue appears to have been assembled on a somewhat ad hoc basis.

This ruling sets an important precedent that it is unlawful for governments across Europe to label citizens engaged in peaceful protest #domesticextremists and put them on a database for a potentially indefinite period.

The Network for Police Monitoring (Netpol) has run a long campaign against using the term “domestic extremist”. Speaking to The Canary about the decision, coordinator Kevin Blowe stated:

The decision of the ECHR means the time has come for the police to now abandon the meaningless and arbitrary categorisation of campaigners as ‘domestic extremists’ and close down their secretive database.

Blowe also called for a separation between public order policing and counter-terrorism policing:

Another way to help provide the ‘heightened level of protection’ the ECHR says political opinions need from unwarranted surveillance is also the complete separation of public order policing from counter-terrorism units. These units have no business involving themselves with legitimate political campaigning.

And he highlighted the “chilling effect” of surveillance at protests:

The freedom to protest is threatened by constant, unnecessary and intrusive surveillance, which the ruling acknowledges can have a chilling effect on participation. Campaigners now need stronger legal protections, including strict limits on filming and other overt intelligence-gathering at demonstrations.

This is a massive victory for anyone who wants to protest without ending up on a police database. It also has implications for many people whose data is already held on the domestic extremist database, including journalists.

It also means both the police and the government urgently need to address how they use the ‘ambiguous’ term “domestic extremist” – and hopefully relegate it to the dustbin where it belongs.