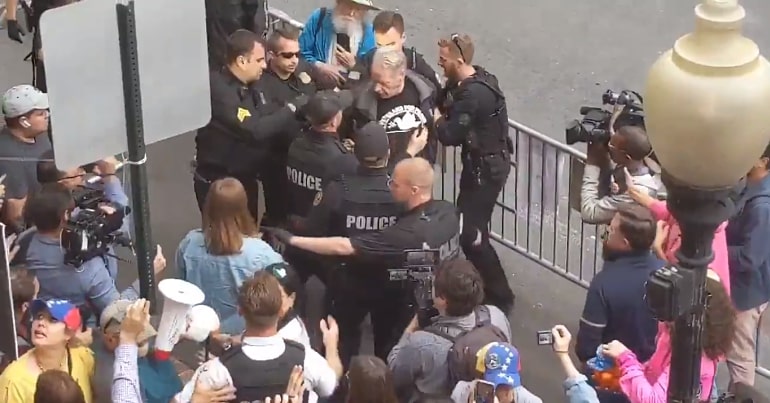 For weeks, a group of peace activists has been resisting efforts by the US-backed Venezuelan opposition to illegally seize the Venezuelan embassy in Washington. Opposition supporters are using various means to try to take over the embassy over, including blocking food and cutting off the building’s electricity. And now, US police officers have been filmed violently arresting an army veteran who was trying to get food into the building.

On 8 May, members of the US secret service police arrested Veterans For Peace (VFP) president Gerry Condon. His crime? Trying to throw a cucumber over to the embassy protectors.

Journalist Alex Rubinstein, who has been reporting from the embassy, recorded a video of the event:

BREAKING: Police violently arrest the president of @VFPNational, Jerry Condone, for trying to get food into the embassy. He is left with lacerations on his face. @UrsulaRozum also arrested. Opposition walks away with stolen food. pic.twitter.com/KhPvSAtC05

Cordon’s arrest appears overly aggressive, given his ‘crime’ of throwing food to embassy protectors. And after police drag him to the floor, blood can be seen across his face.

Another angle of the event makes the police’s response seem even more disproportionate:

Another view of the @SecretService bashing @VFPNational National President Gerry Condon's face into the ground before arresting him.

Trying to throw a single cucumber up to the Embassy Protection Collective. #HandsOffVenezuela @RealAlexRubi @anyaparampil pic.twitter.com/4BX4gnO5tY

We must do all we can to join this historic struggle for peace, justice and self-determination in our hemisphere.

On Tuesday night, five VFP members participated in a successful delivery of food, medicines, and clothing to our friends inside the Embassy. Despite intimidation and physical blocking from right-wingers, we remained nonviolent, and achieved our objective.

But Wednesday afternoon, while attempting a second food delivery, Gerry Condon was surrounded by Secret Service and thrown to the ground. See this Twitter thread to see how violently he was arrested while remaining completely peaceful.

Who is the secret service protecting?

This isn’t the first time that US security services have arrested people trying to bring food into the embassy. In early May, police arrested Ariel Gold (an activist with peace group CODEPINK) for “throwing missiles” (i.e. throwing food to embassy protectors).

Some opposition supporters outside the embassy have been identified as employees or former employees of arms dealers (like Raytheon) and international financial institutions. They have also been accused of trying to smear CODEPINK activists with a misleading video. But as Peter Bolton reported for The Canary:

In addition to hurling racist, homophobic and sexist abuse at the activists and their supporters, there have also been reports of physical assaults against anti-coup activists.

Their behaviour reflects some of the ugliest aspects of the right-wing opposition in Venezuela, which reportedly burned an African-Venezuelan man alive in a racist attack in 2017.

But rather than stopping their brazenly illegal actions, the US secret service is demonstrably abetting the opposition forces. As journalist Ben Norton wrote:

The US police and Secret Service are protecting the violent fascists trying to starve peaceful activists defending the Venezuelan embassy in DC.

Never forget this is precisely the role of the US police: defending the capitalist ruling class from the masses

The coup-plotting Venezuelan opposition is using increasingly dirty tactics to gain control of an embassy that does not legally belong to them. But peace activists aren’t giving in. They’re calling for people in the US to call the secret service and ask why they are allowing this situation to continue. And they’re calling for support for the groups helping to uphold international law.