‘How can we trust Corbyn once he’s in power?’ Yanis Varoufakis had the perfect response. - The Canary 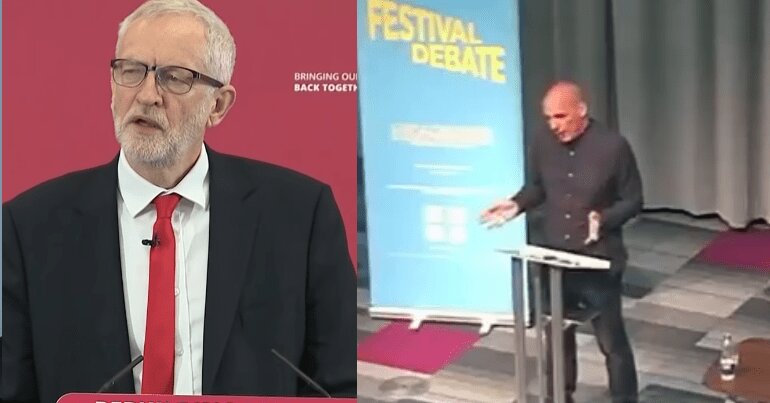 Greece’s former finance minister Yanis Varoufakis was asked how we can trust Jeremy Corbyn at the Festival of Debate. And Varoufakis had the perfect response.

How we can we be sure Jeremy is not going to deceive us? … We can’t. Seriously now, we can’t. The only reason why I am much more hopeful about Jeremy is because he’s a little bit of a reluctant leader…

The economist then compared Corbyn to Greek prime minister Alexis Tsipras, with whom Varoufakis was in government before he resigned:

[Corbyn] is doing it as a chore; whereas Tsipras loved every second of it.

Yanis Varoufakis was asked 'How can you/we trust Jeremy Corbyn?' (given his experience with Tsipras in Greece)
His response nails it#JC4PM pic.twitter.com/UJzs0P5PN6

The uphill struggle Corbyn faced to become leader also explains why political sceptics trust him. Because the Labour Party establishment didn’t mean to allow a candidate like Corbyn to run for the leadership in the first place. Corbyn needed nominations from 15% of Labour MPs to run. And as Alex Nunns writes in his book The Candidate:

The nomination threshold was intended precisely to prevent someone like Corbyn joining the field.

Pressure from online activism reportedly helped to convince enough MPs to ‘lend‘ Corbyn their leadership nominations. Many of these MPs later said they regretted it.

But the strategic hurdles designed to stop candidates like Corbyn didn’t stop there. Because members of the public were then able to vote in Labour leadership contests for just £3; and as Nunns writes, this was supposed to damage the progressive ‘left’:

As a brainchild of the Blairites, the scheme was intended to diminish the influence of activists and trade unionists and cement Labour in the fabled centre ground.

In the end, though, that backfired. Because Corbyn copped 83.8% of the vote from the £3-paying registered supporters. When it came to full members and affiliates, the MP for Islington also won double the vote share of Andy Burnham, his closest competitor.

Another reason people trust Corbyn is his gold-standard record. Unlike much of Labour, Corbyn was dedicated to opposing the apartheid regime in South Africa. In fact, he was arrested for protesting.

And it’s not just racism Corbyn has consistently stood against. He has fought for LGBTQI+ rights since doing so was far from mainstream and considered ‘loony’ by many. The party leader was the only Labour MP to break Tony Blair’s whip to support a Liberal Democratic amendment to a 1997 human rights bill that outlawed discrimination based on sexuality.

In 2015, Corbyn reluctantly put himself forward for the leadership because the anti-austerity movement needed him. And he fought the Labour establishment to do it.

Throughout his political career, Corbyn has been on the right side of history. And principles have been more important than careerism. This is why Varoufakis is very hopeful. It’s also why people fight for Corbyn in a way that other politicians could only dream of.