A 200-year-old law is punishing the most vulnerable, but people are fighting back - The Canary 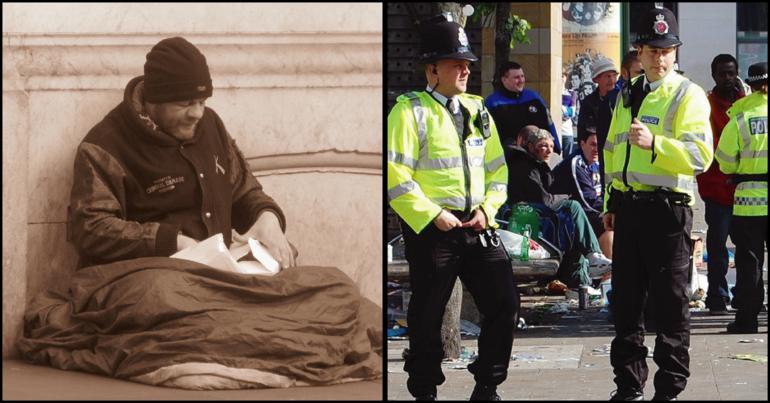 The Vagrancy Act was created in 1824 so that the authorities could legally harass homeless veterans of the Napleonic wars. The act makes behaviour such as begging and rough sleeping illegal. Disturbingly, this act is still being enforced today. That’s why charities are pushing for the government to #ScrapTheAct.

Should homelessness be a crime?

Click here if your answer is no: https://t.co/8FF21nagQb#ScrapTheAct #VagrancyAct #EndHomelessness

Homelessness charity Crisis has detailed the issues with the Vagrancy Act:

The Vagrancy Act does nothing to resolve the root causes of homelessness. In fact, it’s more likely to push someone further from the vital services that help them to move away from the streets…

The Government is soon to review the Vagrancy Act, but hasn’t said that they will repeal it – yet. Until they do, vulnerable people will continue to be pushed even further from support.

That’s why we’re calling on the UK Government to #ScraptheAct once and for all.

Crisis has also produced a video which highlights the hardships people have suffered because of the Vagrancy Act. In it, Shaun from Blackpool explains:

The police kept coming over to me and asking me to move. They didn’t tell me anywhere to go and get help. The court fined me £150. Afterwards, I was just sent on my way.

At the end of the day if someone’s begging on the street, that person needs help, not being arrested for it. It would be brilliant if the Vagrancy Act could be repealed. That would help turn public opinion back to helping homeless people instead of punishing them.

I personally never found it comfortable arresting someone for rough sleeping or begging. The real reasons for homelessness… are not solved by criminalising people… we should be criminalising failing to support homeless people.

The charities pushing for this move have received a positive response, and ‘Vagrancy Act‘ has been trending on Twitter:

Fully support the move to repeal the Vagrancy Act 1824. A wretched piece of legislation that has no place in a modern legal system. Few things more depressing than representing a homeless person being prosecuted for begging. https://t.co/WJ0y4dKfaz

Some people pointed out how easily the homelessness crisis could be solved:

The Vagrancy Act can land someone with a fine of up to £1,000 and a two-year criminal record. It’s already been repealed in Scotland and Northern Ireland, and its use in the rest of the UK has reduced. Although that sounds positive, the Guardian notes:

Despite falling use of the act, many councils opt to use civil powers under the 2014 Antisocial Behaviour Act, such as a public space protection order (PSPOs) to ban begging, rough sleeping and related activities.

A Guardian analysis earlier this year found at least 60 councils were using PSPOs, allowing them to issue £100 fines which, if left unpaid, could result in a summary conviction and a £1,000 penalty. This was despite Home Office guidance not to target the homeless.

Labour has said it would repeal the Vagrancy Act.

The housing and homeless minister Heather Wheeler has responded to recent calls by saying:

No one in this day and age should be criminalised for having nowhere to live. I’m committed to ending rough sleeping for good and our Rough Sleeping Initiative is providing an estimated 2,600 additional beds and 750 more support staff this year.

We’re also carrying out a wider review of rough sleeping and homelessness legislation, including the Vagrancy Act, and will set out further steps in due course.

As the Tories don’t have the best track record for keeping their promises (and we’re facing a reshaped government within weeks), the time is now to put pressure on those in charge to #ScrapTheAct and end homelessness for good.