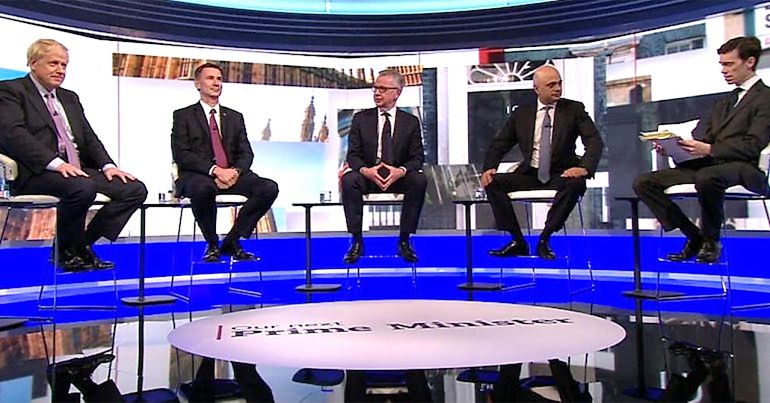 On 18 June, Conservative leadership hopefuls met for a live TV debate on the BBC. In theory, this was a chance for the UK to gain more insight into what we might expect from the next PM. But it turns out there’s more focus on what to call the country’s latest boyband. Yes, really.

There were some key ‘moments’ in the debate. Michael Gove, Jeremy Hunt, Sajid Javid, Boris Johnson and Rory Stewart shouted over each other so much that host Emily Maitlis told them to “shh”:

when five men who want to be Prime Minister need to be shushed pic.twitter.com/Ps0526Jlq5

Stewart and Johnson both discussed the all-important UK issue of sheep farming.

Jeremy Corbyn, you discredited Marxist, get back into the dustbin of history where you belong.

To deflect any charges of Islamophobia or racism, Johnson mentioned his “Muslim great-grandfather”. Hunt insisted he can’t possibly be racist because his wife’s Chinese and his children look “different”.

There was a little bit of politics. Former health secretary Hunt, for example, admitted that under his watch social care cuts “did go too far”:

Wait, did Jeremy Hunt just admit cuts to social care while he was the Health Sec went too far?!?!

Not surprisingly, there was lots of Brexit bickering and no one presented a clear plan. No change there then.

This BBC debate is plain nuts…

The quality is awful. We’re looking at the dissent of our country right here.

They’re all admitting it’s a mess, arguing with each other, and saying they are preparing for no-deal because they want a deal.

But the following morning, what they’d said, or failed to say, became far less important.

According to the Telegraph‘s Christopher Hope, the five wannabes joked off camera with Maitlis “that they were a boy band”:

The Conservative candidates joked off camera that they were a boy band, presenter @maitlis has revealed.

But which boy band would they be?
How about: Wrong Direction or Take What?
Post your answers at the @Telegraph's live blog: https://t.co/Ij78YGsp0o

Perhaps it was the stools. Because suggestions came in thick and fast to name the band long before anyone even knew that the Eton Mess also thought they were a boyband:

Who's idea was it to put the candidates on these chairs like they're a 90's boyband. Brexstreet boys? Exitlife? Tory Sync? #BBCOurNextPM

And they kept on coming:

Looking at the motley crew of so-called "leadership candidates", it has been suggested that they resemble a bad boy band. Suggestions, please, for a name. So fast we have "No Direction" and "Take Twat"…

But, on Twitter at least, the favourite name seems to be No Direction:

However, there are already rumours of a split:

BREAKING: Rory set to leave Tory boy band No Direction due to creative differences. "I didn't want to be tied down", said Stewart as he contemplates a solo career…#ToryLeadershipContest #BBCOurNextPM pic.twitter.com/FhP4pssyDA

The following day, a report highlighted that eight million working people in the UK now live in “relative poverty” – a 40% rise since 1994. The British Medical Journal explained that a “workforce crisis” is the “biggest threat to the NHS’s existence”. And the number of people sleeping rough in London went up 18% – a record high. Against this news, finding out the Tory leadership candidates think they’re a boyband says it all really.

One of these five men will become the next prime minister. And that’s truly terrifying.