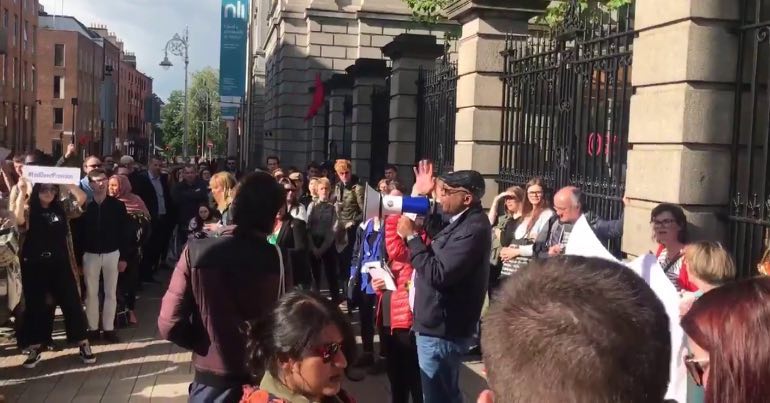 Asylum seekers and refugees in Ireland held a demonstration outside Ireland’s parliament on World Refugee Day. They were protesting to highlight their treatment by the government and the use of direct provision. And they called for an end ‘to borders, nations, and deportations’.

The Movement of Asylum Seekers in Ireland (MASI) was at the demonstration. On its Facebook page, it said that speakers at the event pointed out that asylum seekers “just want to get on with their lives”. And that means ending direct provision (the system by which the government houses asylum seekers while it’s assessing their applications) and deportations.

The demonstrators also went on to criticise the role of NGOs in supporting the direct provision system:

We heard that NGOs must stop applauding pathetic "improvements" as if allowing human beings to cook is the most ground-breaking work in advancing fundamental human rights and must be praised. Reflect on why it is that you're celebrating that as an improvement. #WorldRefugeeDay pic.twitter.com/s6vbEeUp69

On this #WorldRefugeeDay, we stand in solidarity with all displaced people outside Leinster House to protest Ireland’s complicity in the EU border regime and its inhumane treatment of asylum seekers and refugees. #EndDP #StopDeportations #NoOneIsIllegal

Queer Action Ireland was at the protest too. It said the demonstrators called for an end to borders and direct provision:

“No borders, no nations, stop deportations”

People who’re living in, or have previously lived in, direct provision recently told a government committee what it’s like. One woman revealed that her child is “showing signs of depression” as a result of their living conditions. Meanwhile, MASI told the committee that another woman had to sell “sexual favours” to support her family while in direct provision.

This explains the importance of direct provision to those protesting. But as one attendee put it, we can’t keep relying on others to educate us about it:

This was a really powerful event but we can't keep relying on people in DP to educate us. We must educate ourselves. https://t.co/k1fvePA3i8

in ad hoc emergency accommodation: hotels and B&Bs across the country with little or no support bar that coming from local members of the community.

What’s more, it’ll then take 15 months for them to receive a decision on their application from the government. These facts, IRC insisted, “are symptoms of a system that is not working”.

Bulelani Mfaco, a member of MASI, described his own experience of direct provision on the morning of World Refugee Day:

I had to queue for breakfast in a Direct Provision centre this morning with people who look like me. Children had breakfast & got lunch sandwich for school (same daily). We use a segregated bus and are forced to live in state sponsored poverty. That's institutionalised racism pic.twitter.com/dEbNWAOh47

But the government continues to treat asylum seekers and refugees in Ireland in this way. Given this, it’s our responsibility to demand more of the government. And as a result, we must insist at the very least that the basic dignity of those in direct provision is upheld. If we do nothing, we’re just as guilty as the government.