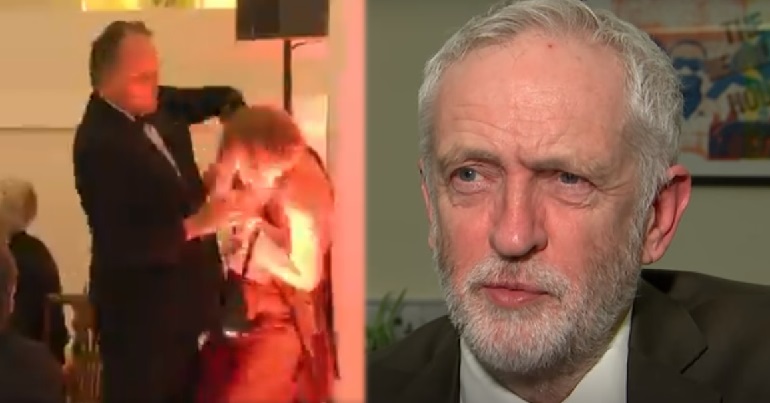 As Conservative MP Mark Field faces accusations of assault for his aggressive response to a peaceful protest, one video of Jeremy Corbyn reveals a completely different picture of what politics could be like.

On 20 June, Greenpeace activists interrupted an elitist black-tie event in London with a climate emergency protest. During the protest, Tory minister Mark Field grabbed a protester by the neck and shoved her out of the building. His party has since suspended him from his ministerial post. The protester, meanwhile, is receiving support from people all over the country.

For many people, Field represents an elitist disdain for peaceful protesters – particularly from the ruling Conservative Party. And an April letter from Field calling for the police to exercise a “much firmer grip” on climate crisis protests only confirms this apparent contempt.

Do Tories realise that slamming a climate change protestor into a pillar for trying to draw attention to the fact our planet is burning might not be the best look?pic.twitter.com/3OoYRJKZ95

A 2018 video of Labour leader Jeremy Corbyn, meanwhile, highlights how he’s the polar opposite of politicians like Field. Because far from shutting down peaceful protests, he has actively engaged in this type of protest himself – consistently.

In the video, Corbyn describes one such protest, where he and late politician Tony Benn sneaked into parliament to put up a plaque in honour of suffragette Emily Wilding Davison:

Corbyn has also won numerous peace prizes for his campaigning. In 2017, for example, he received the Séan MacBride Peace Prize for:

his sustained and powerful political work for disarmament and peace

And one of the most iconic images from his career is when police arrested him for protesting against apartheid:

A different politics is possible

In short, we don’t have to put up with aggressive elitists like Mark Field. They don’t have to represent us in parliament. Because there are politicians out there who consistently stand on the right side of history – the side of justice, peace, and democracy. Corbyn is a perfect example of this. And he’s a poignant reminder that a different politics is possible.