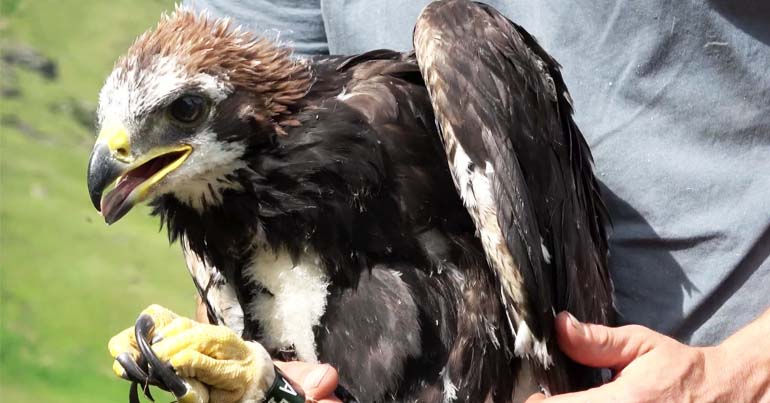 Chris Packham and Raptor Persecution UK (RPUK) announced on 1 July that two golden eagles had “disappeared in suspicious circumstances”. They are the latest birds of prey to have vanished on or near Scottish grouse moors. And while Scottish first minister Nicola Sturgeon has remained silent on the problem, schoolchildren are asking her to show golden eagles “love and protection”.

Children’s writer Gill Lewis asked her followers on Twitter to “inundate” Sturgeon with pictures of golden eagles. It came after Packham and RPUK reported the disappearances of Adam and Charlie, who vanished from Perthshire on 18 April:

Who will join me & send pictures of golden eagles to @NicolaSturgeon and inundate her with the birds we want to see in our skies? Let's ask her to commit to stopping persecution. Two more eagle 'disappearances' reported this week. https://t.co/2LDJtJ0wq2 It is a national disgrace pic.twitter.com/EsQoLbPKOD

As RPUK pointed out, a number of children responded to Lewis’s call out. The Blackman family shared a drawing by 9-year-old Freddie. In his drawing, Freddie asks Sturgeon to “show… love and protection” to the “majestic golden eagle”: 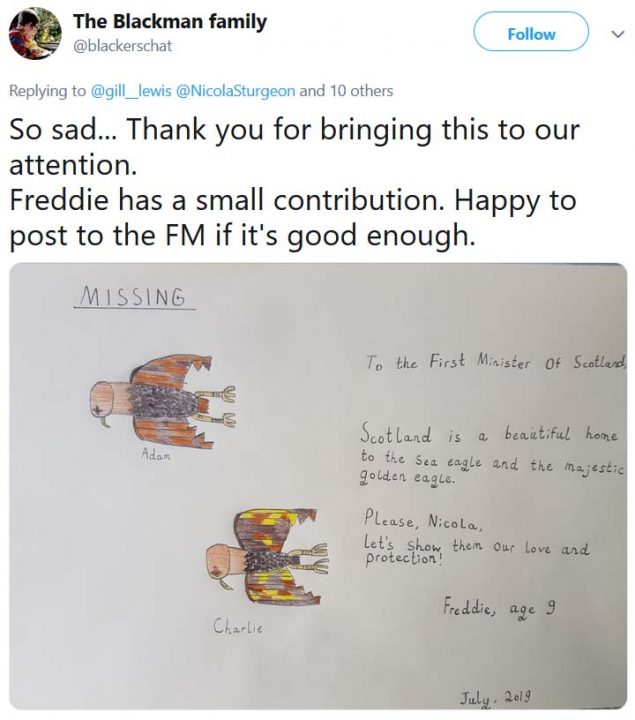 Meanwhile, Nicola Penfold said her 7-year-old son was “horrified” when he heard about Adam and Charlie. Penfold’s son drew a golden eagle with the statement “Help our golden eagle”: 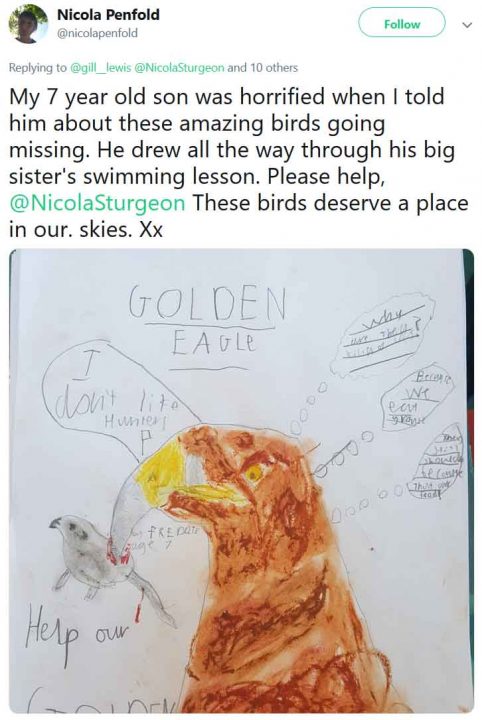 Sunnyside School of Conservation also shared a number of drawings previously done by its students. One said, “please make rules to keep our birds safe”: 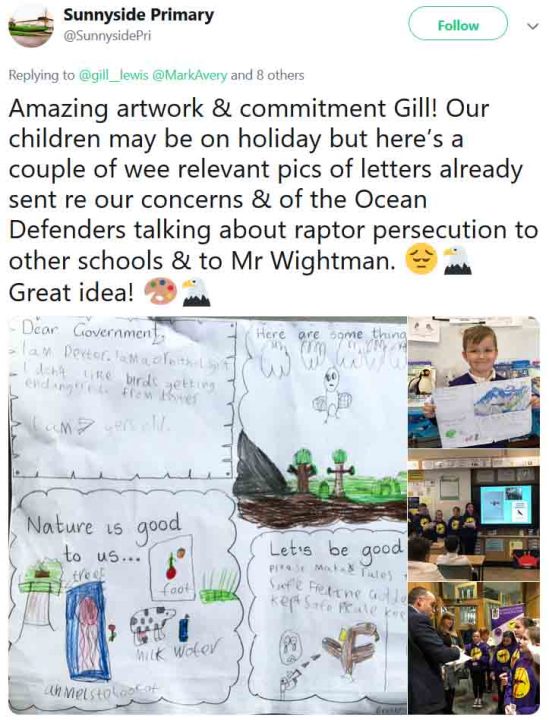 The Sunnyside School drawing mentions Fred, a golden eagle that went missing in January 2018. As The Canary previously reported, Fred’s:

last position was in woodland near a grouse moor just south of Edinburgh… But then, something truly strange happened. Fred’s tag began transmitting again. Ten miles out to sea. The tag transmitted for another couple of days before stopping for good. Its last position was about 15 miles offshore.

Fred first disappeared near a grouse moor south of Edinburgh.

Adam and Charlie disappeared from the Auchnafree Estate, Perthshire on 11:39 and 06:25 respectively on 18 April. RPUK and Packham, who were monitoring the birds, said:

The eagles’ satellite tags, which had been working perfectly well for one and two years respectively, suddenly and inexplicably stopped working… just 3.4km apart. Both the tags and the eagles have since been untraceable.

A police-led search didn’t turn up any clues as to what happened. It also said that there’s no evidence showing the estate itself is connected to the disappearances. Alix Whitaker, spokesperson for the estate, said they were “absolutely shocked” to learn about Adam and Charlie going missing.

RPUK struck out at Sturgeon’s ongoing silence. It condemned the Scottish cabinet for having “remained silent”, not just on Adam and Charlie, but on the death of a hen harrier in an illegal trap and the disappearance of another hen harrier in Cairngorms National Park. Both happened on grouse moors.

Public awareness of raptor persecution is growing, and so is the outcry. Government officials across the UK must start taking serious action now.