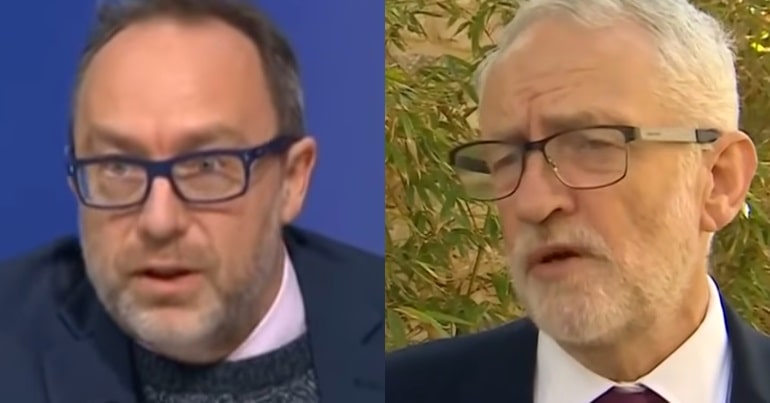 Wikipedia founder Jimmy Wales launched a foul attack on Jeremy Corbyn and the Labour Party on 4 July. On social media, Wales called on people to “get on board with kicking out” Labour’s “antisemitic leadership”.

But the charge that Corbyn and his team are antisemitic is a gross reversal of reality. From signing many parliamentary motions condemning antisemitism to campaigning to save a Jewish cemetery, Corbyn has consistently stood against antisemitism throughout his political career.

Some Jewish Labour supporters were unapologetic in their response to Wales. One, for example, wrote:

.@jimmy_wales
I am a Jew. I support Corbyn.
Your “joke” is ignorant & insulting.
Corbyn is one of the greatest campaigners against prejudice & discrimination of his generation, including against antisemitism

His enemies hate his
1 Socialism
2 Support for Palestinian Rights https://t.co/AvTYrAemUG

For the record, here is a sample of the times Corbyn has stood with Jewish people over the years:

Wales and centrists: ‘the far right and Labour leadership are the same’

The Wikipedia founder didn’t stop there, though.

I tend to agree on the second point and thanks for the kind words on the first point!

My view is that the far left coming into power would be about the same level of horribleness just in a different way.

This is the dumbest shit I’ve ever seen on this website. Crick’s coverage of the Labour leadership has been consistently embarrassing. pic.twitter.com/GgAkJmhkwQ

And so has LBC host James O’Brien, who likened Corbyn supporters to people who back Donald Trump:

Today seems to have been Jeremy Corbyn’s “I could stand in the middle of Fifth Avenue & shoot somebody & I wouldn’t lose voters,” moment. Let’s hope that his ‘base’ has more intellectual integrity than Trump’s. I still can’t quite believe that I’m far from sure it does.

In other words, centrists are equating pro-austerity right-wingers with the Labour leadership and those opposing the discredited and damaging ideology of endless budget cuts. It’s a world where supporting war is somehow the same as opposing it, where inequality and equality are somehow just as bad as each other, and where climate destruction is somehow on a par with climate protection. What a topsy-turvy outlook. A recent UN Human Rights Council report, for instance, states that “policies of austerity introduced in 2010” have had “tragic social consequences”. According to UN special rapporteur on extreme poverty Philip Alston, the Conservative and Lib Dem austerity coalition had “crystal clear” results:

With this in mind, the comparisons from Wales and the centrists are intellectually and morally barren. It’s sickening to equate Corbyn, his supporters and others trying to end destructive legislation with the very architects behind it. But Wales went further; he also smeared the Labour leadership as ‘antisemitic’ even though all the evidence shows Corbyn has campaigned against all forms of racism since the 1980s.

This is embarrassing, fact-free and stomach-churning behaviour that has serious consequences for those suffering under austerity.