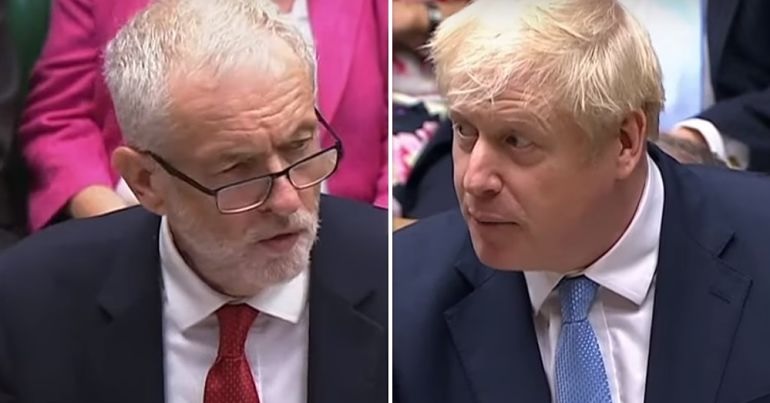 The problem is that Johnson said he “struggled” to understand Corbyn’s hard-hitting questions. And as the Labour leader stressed, the new PM also failed to answer them.

Corbyn sought answers on regional injustices, capital punishment, the Huawei leak, the ‘backstop‘, other Brexit questions, tackling the climate emergency, and deescalating tensions with Iran. And he repeated them for Johnson on Facebook for good measure:

Today was the first time I faced Boris Johnson in Parliament. He said he "struggled" to discover a question in what I'd…

Corbyn also insisted in his exchange with Johnson that the British government now has a [0:13]:

After a decade of divisive policies for the few, we need a government that will focus on the interests of the many. pic.twitter.com/uaKbmEUCJM

Shadow cabinet members John McDonnell, Laura Pidcock and Angela Rayner agreed. They had little doubt that Johnson will lead a Thatcherite government “by the bankers and for the bankers”:

Javid has consistently called for more tax cuts for the banks and corporations. So from the outset it's clear that this is a government by the bankers and for the bankers.

Have no doubt, @BorisJohnson will take us down a path well-trodden by Margaret Thatcher. Whatever his position on Brexit, whatever populist stunts he pulls, Johnson is a hard-line free market fundamentalist who believes in a ‘sink or swim’ individualism: https://t.co/2mn5rD8AuV

I don't know about A Nightmare on Elm Street, this new Johnson Tory cabinet is A Nightmare on Downing Street. A collection of ex failed right wing ministers&MPs brought back from yesteryear dressed up as a new dynamic force to unite the country 🤔We need a general election NOW!

With all of this in mind, the Labour leader asked Johnson – the “Britain Trump“, according to the current US president – to guarantee that the NHS would be completely off the table in any post-Brexit trade deal with the US:

WATCH: Jeremy Corbyn asks U.K. PM Boris Johnson if he can rule out selling the NHS to Trump pic.twitter.com/tKpdtQmHdM

This was the only question Johnson seemed to answer. He said “under no circumstances would we agree to any… free-trade deal that put the NHS on the table”. He is certainly not someone we can trust to be truthful, of course. But that is a promise we should all hold him to.

On the other important questions that Corbyn raised, however, Johnson sidestepped. He simply insisted:

I struggle to see the country he described in his description of the United Kingdom today.

“Not one for coping with detail”

If Johnson’s first performance as PM shows anything, shadow chancellor John McDonnell summed it up perfectly:

The questioning exposed what everyone suspected. He’s not one for coping with detail.

In short, there’ll probably be much more question avoidance to come. But with Corbyn holding Johnson to account every week, and protesters already hitting the streets in large numbers, the new PM’s hard-right cabinet will have a fight on its hands if it wants to push any more suffering onto the British people.