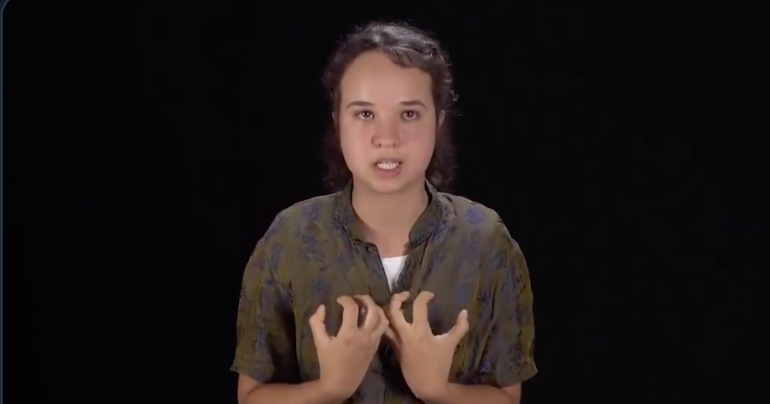 An Israeli woman has released a video explaining why she’s willing to go to prison rather than fight in the army. Maya Bernad-Figenbaum has already spent seven days in a military jail. But she’s prepared to go back because:

The state actively tries to separate us, [and] does not want connections and linkage between Jewish and Palestinian culture.

Thank you to Israelis of conscience like Maya who would rather serve multiple stints in military jail than be drafted into the Israeli army. She chooses to embrace Palestinians rather than de-humanize them. @IsraelSocialTV pic.twitter.com/Np48lmjnNM

All Israeli citizens are required to serve in the military with very limited exemptions. Those who refuse to serve can face multiple prison sentences. Matan Helman went to prison six times. He told Shoal Collective:

The idea of joining the military is really pushed when students reach 17 years old. They have one week of practising with the army and shooting guns. Soldiers also come to schools and explain the roles that people can do.

The process of actually joining the military starts when you’re 16 or 17 years old. You receive a letter from the army and you have to go for some tests to see if you are healthy, to assess your mental health, your skills, and to decide which role you’ll be allocated: whether you’ll be the person cleaning the base, driving the tanks, or flying the aeroplanes.

Helman stated that he decided to refuse to join the military after seeing the occupation for himself:

I started to read articles and books and went to see the occupation with my own eyes. I went to the West Bank with activists from Ta’ayush [meaning ‘Co-existence’: a grassroots network of Palestinian and Israeli activists against the occupation] . I saw the checkpoints, the wall, and how the army takes land from the Palestinians and gives it to the Israelis. Then I understood that it’s a policy of the Israeli government to mess up people’s lives. The army carries out the state’s policies.

“I understand your pain and I will not ignore it”

Bernad-Figenbaum said that one of the reasons she won’t fight is because:

The state actively doesn’t recognise the stories and the narrative of the Palestinian people. My meetings with them influenced my refusal. I totally identify with the injustice they are going through.

And she said that her refusal is:

my way of telling them: I see you, I understand your pain, and I will not ignore it.