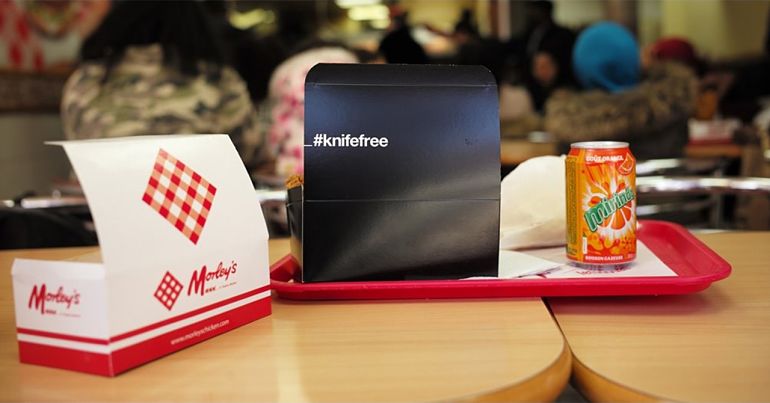 The Home Office has launched a new wheeze to tackle knife crime. Judging by the responses, though, it could be one of the worst ideas it’s ever had.

London-based writer George Luke spotted what might be going on, making reference to the racist stereotype that ‘Black people love fried chicken’: 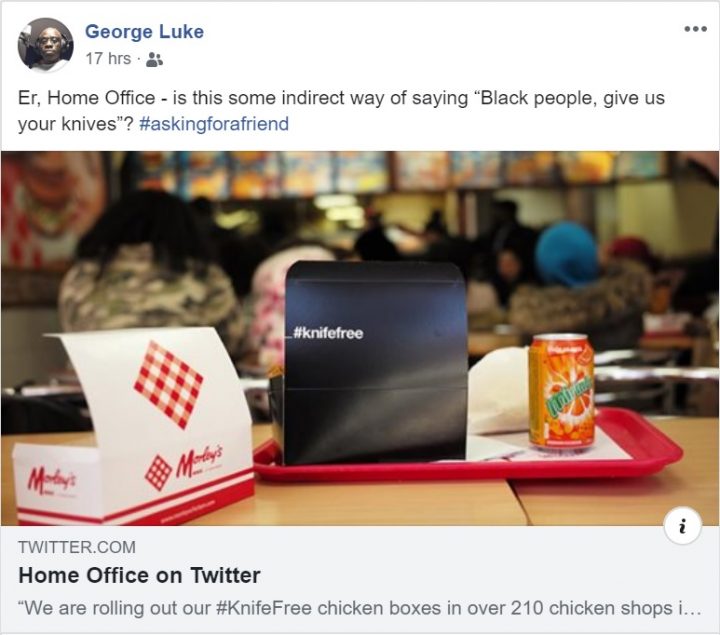 Gamer GonzoKRS went further, calling the scheme “racial profiling”, and drawing a comparison to the recent announcement about stop-and-search powers:

First it was the news of new stop and search laws, now it's #KnifeFree messages on fried chicken boxes.
This is racist, and racial profiling.
The powers that be know this, they want to spread hatred, division, and civil unrest.
Don't fall for their obvious trap!

And Labour MP David Lammy suggested the campaign had more than a whiff of Boris Johnson about it, given that the prime minister has previously called Black people “piccaninnies” with “watermelon smiles” (again, echoing racist imagery):

Is this some kind of joke?! Why have you chosen chicken shops? What's next, #KnifeFree watermelons? https://t.co/34DwwxSmCN

Shadow home secretary Diane Abbott, meanwhile, denounced the chicken box plan as “crude, offensive and probably expensive”. She also said the Home Office “would do better to invest in our communities not demonise them”.

Academic and former youth worker Adam Elliott-Cooper appeared on Sky News to discuss the chicken boxes. And he highlighted the background of Conservative cuts:

at a time when over 100 youth centres have been closed across London, this really is an insult to see these kinds of resources being put on chicken boxes instead of real, tangible youth services.

He then described how one of the stories on the boxes talks of a young man growing up with few opportunities. His message to the government was clear:

And he finished by saying:

I think it’s a profound insult to these young people as well, when these opportunities are being taken away, that you’re putting a story about this lack of opportunities on the back of a chicken box.

It's an insult that the government is putting resources into chicken boxes while cutting vital youth services.Adam Elliott-Coope on Sky News on the offensiveness of the Home Office plans to tackle knife crime via chicken boxes.