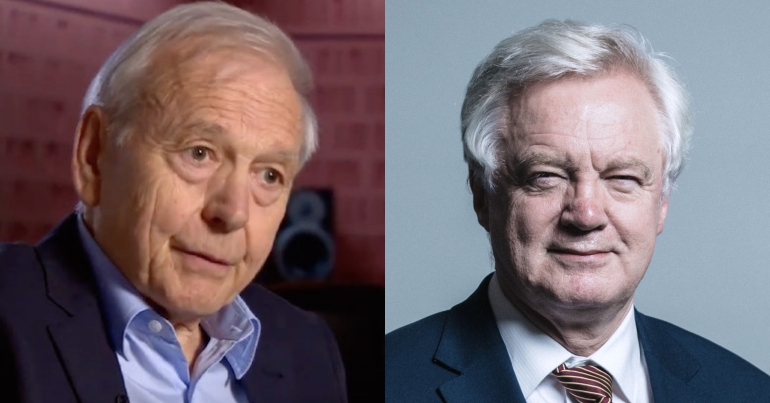 On 22 August, John Humphrys interviewed former Brexit secretary David Davis on BBC Radio 4’s Today programme. Humphrys is known for his chummy, laugh a minute interviews with Davis. But this time he took it to a new level. Because he seemed to start the interview by joking about domestic violence.

Oh, how we laughed about punching women

A dancer in the World Tango Championship has been disqualified after witnesses saw him punching his wife and dancing partner. The story was covered as the last news story before the interview with Davis.

Any rational thinking person would realise this is not something to joke about. But apparently not so for Humphrys and Davis. First, people noticed that Humphrys sniggered after the news bulletin. And then Davis started the interview by saying:

I guess this is our last tango.

I promise not to punch you if you don’t punch me.

Unsurprisingly, people on social media were not impressed:

Have @BBCRadio4 really just told a jokey news story about domestic violence?! With the awful #johnhumphrys and the foul #DavidDavies sniggering and adding their own jokes?! Ffffffffffssssss #radio4

Hi, absolutely, but the sniggering and jokes afterwards were by the presenters and then the banter was between John Humphrys and David Davis. It was appalling. They should meet women in refuges who can tell them how ‘funny’ it is (not) to be punched in the face by their partner.

For some, it provided yet another reason why they’re switching off Radio 4:

John Humphrys and David Davis sharing chummy laughter about a woman being assaulted. After 25 years, it’s time to wave goodbye to #r4today

A cosy chat down the pub

Although it’s hard to get worse than laughing about domestic violence, the rest of the interview wasn’t exactly exemplary. As people pointed out, it was more like a “cosy chat” than a robust political interview:

John Humphrys sounds like he’s having a cosy chat with one of his friends when he interviews David Davis. No surprise Davis is a fan. #r4today

John Humphrys interview with the equally clueless David Davis made for sickening listening. More like a couple of uninformed friends chatting over a pint in their local. This has to represent the nadir of the Today programme. #r4today

And one Twitter user summed up just how little anyone wants to listen to Davis:

I would listen to this interview with David Davis on #r4today right now, but I’ve been standing in this queue for 3 days just to stick my head in this cow’s arse and I don’t want to lose my place

According to the Office for National Statistics, 2 million adults experienced domestic abuse in the UK in the year ending March 2018. As it also points out, it’s often a “hidden crime”. It’s not something to joke about at any time. But it’s especially not something we should expect an MP and our public service broadcaster to joke about.

Davis and Humphrys using the news of a man punching a woman for their chummy banter is utterly disgusting and shows both men are unfit to hold their positions in public life.