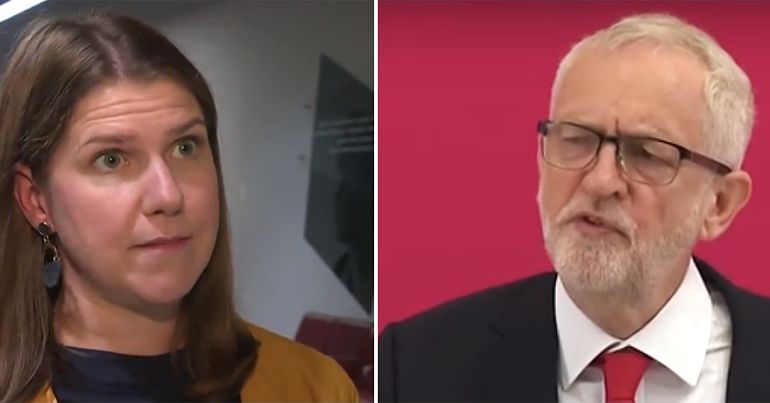 Jo Swinson believes passing legislation is the best way to avoid a disastrous no-deal Brexit. This would allow parliament to take over and block a no-deal. She previously proposed Ken Clarke and Harriet Harman as possible caretaker prime ministers in the event of a vote of no confidence against Boris Johnson’s government. Now the Liberal Democrat leader is suggesting that Jeremy Corbyn’s cross-party talks are just “mucking about”. Swinson has lost whatever minute amount of credibility she may have had.

The online response to her nonsense was swift, as were calls for her resignation:

Swinson should resign in the national interest for a Lib Dem leader who is serious about stopping no deal.

Save us wasting further time pointing out your vacuousness until your inevitable resignation. https://t.co/b9QumR6HkV

Prior to a meeting on 27 August, organised by Corbyn with leaders of opposition parties, Swinson said she didn’t “want to spend time mucking about on ideas that aren’t going to fly”.

So people took to social media to remind her just how many people she represents:

Why is the leader of the fourth party in Parliament, who has hardly any MPs, most of whom she has borrowed, allowed so much airtime? Her and her party are punching beyond their pay grade here.

As leader of the opposition and 247 MPs, Jeremy Corbyn proposed tabling a motion of no confidence in Johnson’s government at the earliest possible opportunity.

Then, following a successful vote against the government, Corbyn would seek support in the House of Commons to lead a “time-limited” government. This government would then call a general election and secure “the necessary extension of Article 50 to do so.”

So in the general election that follows:

Labour will be committed to a public vote on the terms of leaving the European Union, including an option to Remain.

I've written to the leaders of other political parties and senior backbenchers from across Parliament to lay out my plan to stop a disastrous No Deal Brexit and let the people decide the future of our country. pic.twitter.com/Jz1MjXCrqk

Corbyn has the numbers, Swinson is miles off

Corbyn leads the largest opposition group in the House of Commons. Swinson represents just 14 MPs. So her dismissal of Corbyn’s proposal not only shows where her loyalties lie, it shows she’s unfit to lead even a small group.

People took to social media to highlight how little support she and her ideas have:

Who the feck does she think she is .. and shame on MSM giving her air time pic.twitter.com/TTHYqxujsA

Jo is a fraud or an idiot. Or both

She wants national unity:
-that ignores half the country
-through a group of MPs who are only united in their dislike of Corbyn
-to #StopNoDeal thru’ any means necessary except the one that is on the table

& Corbyn should indulge their fantasy

Some also picked up on her real reasons for meeting with Corbyn:

Jo…..it appears from reading your letter….you are not going tomorrow 2 have a civilised discussion….you're going in with a set of demands 4 @jeremycorbyn …
Tell us all Jo How would YOU go about preventing a No Deal🤔 …..
Maybe go 2 the meeting tomorrow just listen & 👇 pic.twitter.com/kq4SC0EhvT

Do the decent thing Jo – resign!

As well as leading a tiny fringe of MPs, the reaction to Swinson’s suggestion shows how irrelevant she is. It shows she commands neither the support nor the respect of the British people. Time she did the decent thing.