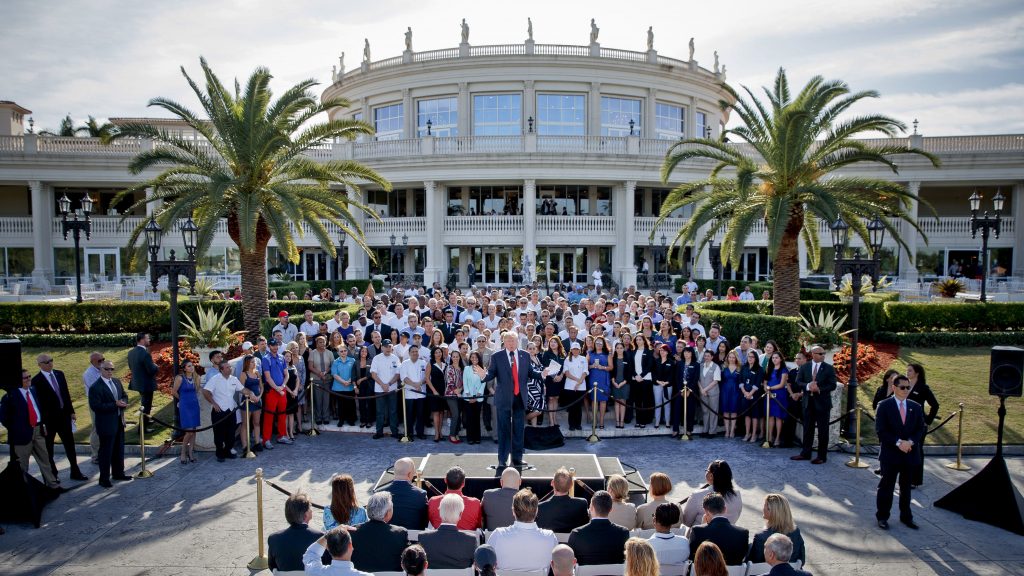 President Donald Trump says his Doral golf resort in Miami is the ideal place for the next G7 Summit, sparking a debate on ethics.

The US president was eager to say why he believed the complex would be the perfect venue for world leaders to thrash out deals and get to know each other.

The complex is close to the airport, has plenty of hotel rooms, separate buildings for every delegation and even top facilities for the media and the president has made no secret of his desire to host the gathering there.

Government ethics watchdogs, however, have long railed against the perils of Trump earning money off the presidency and hosting foreign leaders at his properties.

But they say Trump’s proposal to bring world leaders to his Miami-area resort takes the conflict of interest to a whole new level because, unlike stays in Washington, they would have no choice but to spend money at his property.

Larry Noble, a former general counsel at the Federal Election Commission, added: “This is him making it perfectly mandatory that they stay at his resort.”

Trump’s proposal at the G7 Summit in Biarritz, France, portrayed the Doral resort in the most glowing terms, even though he said later he was more interested in logistics for the meeting than making money.

“We have a series of magnificent buildings … very luxurious rooms,” Trump told reporters.

Trump’s pitch comes as several lawsuits accusing the president of violating the US Constitution’s emoluments clause, which bans gifts from foreign governments, wind their way through the courts.

It also comes as Doral, by far the biggest revenue generator among the Trump Organisation’s 17 golf properties, appears to have taken a hit from Trump’s move into politics.

The trouble began soon after Trump announced he was running for the presidency in 2015 with a speech that called Mexican people crossing the border illegally rapists and murders.

The PGA and Nascar moved events that used to be booked at Doral elsewhere.

Eric Trump, who is overseeing the business with his older brother, Don Jr,  said last year that “the Doral is on fire”.

Trump’s financial disclosure also shows he owes a lot of money to Deutsche Bank for the property, which helped him buy it in 2012.

A Trump Organisation consultant told the Miami-Dade Value Adjustment Board last year that the property was “severely underperforming,” according to The Washington Post.

The local government cut the resort’s assessed value for 2018 from 110.3 million to 105.6 million US dollars, according to county records.

Another sign of trouble is the long list of former Doral members who quit the club years ago but are still waiting for their initial deposits back.

New members have to join first for old ones to get refunds, but that is not happening, according to Doral member Peter Brooke.

He says some former members have been waiting for 10 years or longer.

Brooke said a G7 summit would bring in “considerable income” for the club, citing the need to accommodate Secret Service, guards and other staff that must accompany each foreign government delegation.

“They would have to house all of them at the various lodges, not to mention food and more staff,” he said.

In an effort to assuage critics, Trump agreed before he took office to donate profits from foreign government spending at Trump Organisation properties.

But the company is private, so it is not certain the 340,000 US dollars donated so far is all of the profits, or even precisely how “profits” is defined.

The company has also said it does not actively seek foreign government business, and even tries to turn it away.

Earlier this year, Eric Trump said the company goes “to great lengths” to discourage such spending.

It was not clear how hosting the G7 would square with this policy.

The Trump Organisation did not respond to several requests for comment.

At Monday’s news conference in Biarritz, Trump spoke as if the idea of making money off the summit never entered his mind.

In fact, he said, other people were pushing Doral as a venue, not just him.

He said the Secret Service and the military have been visiting various sites and appear to have formed a consensus already.

“They went to places all over the country and they came back and they said, ‘This is where we’d like to be’,” Trump said.

“It’s not about me. It’s about getting the right location.”

He then added: “I’m not going to make any money.

“I don’t want to make money. I don’t care about making money.”