Boris Johnson just spoke such sickening words in parliament, even Kuenssberg recoiled in horror - The Canary 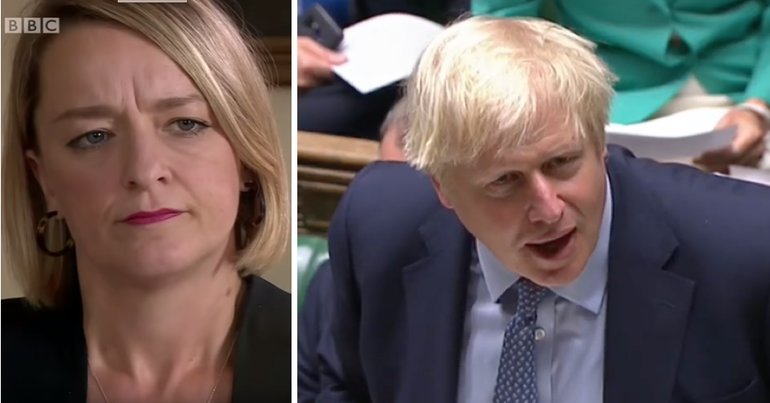 CORRECTION: This article originally stated that Johnson replied “I never heard such humbug in all my life” to Jo Cox’s successor. In fact, he said it to Cox’s friend, Paula Sherriff MP, whose constituency neighbours Batley and Spen. The article was corrected at 10.00am on 26 September.

Boris Johnson has been widely condemned after appearing to diminish the murder of Labour MP Jo Cox. Cox’s friend and neighbouring MP Paula Sherriff asked the PM to reconsider his use of “dangerous” language like the “Surrender Act” in relation to Brexit in light of Cox’s murder by a far-right extremist in June 2016. Johnson replied: “I never heard such humbug in all my life.” He then went on to claim that the best way to honour the memory of Jo Cox, a renowned pro-EU MP, would be to deliver Brexit. The remarks drew criticism from across the political spectrum, and even BBC Chief Political Editor Laura Kuenssberg.

There are legitimate passions on all sides – but not even many Tory MPs mightl comfortable defending this- Johnson accused one of Jo Cox's friends and Parliamentary neighbours, one of many who's faced serious threats, of 'humbug' when she asked him to be careful with his words https://t.co/FMxQOisQHl

Murdered by the far right

In June 2016, Labour MP Jo Cox was brutally and publicly murdered by a right-wing fanatic. His diet of right-wing propaganda was a motivating factor in his attack. This tragedy proved that the right-wing lie machine does not just destroy reputations, it destroys lives.

It comes as little surprise then to find just how deeply these remarks shocked and appalled politicians, journalists and voters alike.

Boris Johnson: “The best way to honour the memory of Jo Cox and indeed the best way to bring this country together would be, I think, to get Brexit done.”

Genuinely quite shocked by Boris Johnson describing as 'humbug' Paula Sheriff's complaint about his language in which she talked about Jo Cox and said that she and other colleagues had received death threats. I've transcribed what happened: pic.twitter.com/WNmiA893Qv

In the House of Commons, @BorisJohnson has just said the words: "The best way to honour Jo Cox's memory is to get Brexit done."

I don't know how Labour MPs can bear to listen to this.

Boris Johnson says the best way to respect the memory of Jo Cox is to ''deliver Brexit''. A statement so inflammatory and callous that it should catch in the throat of every reasonable person.

Boris Johnson is an unelected PM, serving only on the patronage of fellow Conservative MPs. He is yet to pass a single bill through parliament. And yet he has managed to debase the House of Commons and the country, with a callousness that would make Theresa May wince. First, by unlawfully proroguing parliament in efforts to secure a no-deal Brexit for which nobody voted. And now, to bluster through the calamitous aftermath by trampling on the memory of a murdered MP. It is time for this mop-headed proto-fascist to leave the stage. Resign Boris Johnson. It might be the most significant contribution you make to this country.