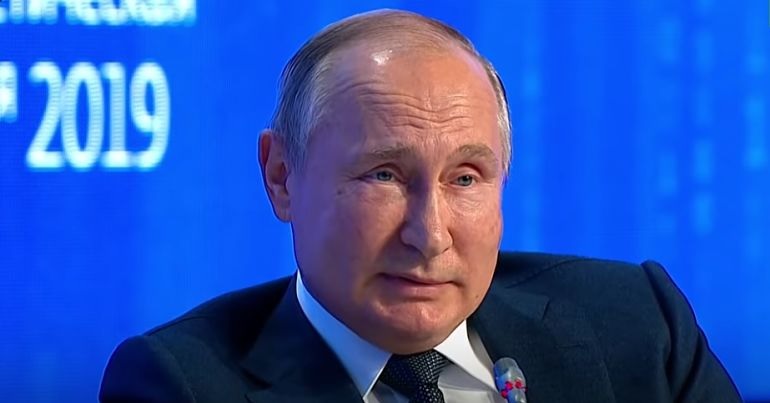 Vladimir Putin just achieved the impossible: he outdid Donald Trump in sheer ludicrousness. The Russian president shared his thoughts on Greta Thunberg, the young Swedish climate activist who’s inspired mass protests around the world. They’re astounding in their hypocrisy and lack of awareness.

Adults have a duty

Thunberg recently spoke at the UN. In her passionate speech, she said:

Entire ecosystems are collapsing. We are in the beginning of a mass extinction, and all you can talk about is money and fairy tales of eternal economic growth. How dare you!

US president Donald Trump responded by – surprise, surprise – tweeting sarcastically about Thunberg. But Putin’s response was even worse. Speaking at an energy forum this week, he said:

I don’t share the common excitement about the speech by Greta Thunberg. I’m sure that Greta is a kind and very sincere girl. But adults must do everything not to bring teenagers and children into some extreme situations.

But when someone is using children and teenagers in personal interests, it only deserves to be condemned.

'When someone is using children and teenagers in personal interests, it only deserves to be condemned' – #Putin on #GretaThunberg https://t.co/TyiCO7V7k1 pic.twitter.com/AkupOmGgBQ

The insinuation here is that the situation Thunberg finds herself in, where she appears at the UN and multiple other platforms talking about the climate breakdown, is somehow ‘extreme’. But Putin fails to grasp – or acknowledge – that what’s truly ‘extreme’ about the life of today’s young people, including Thunberg, is they’re living through a climate crisis. They’re near the beginning of their lives on a planet whose future they know is uncertain – and it’s decisions by people like Putin that have put them in this ‘extreme’ position.

According to a 2018 report by the European Commission, Russia is the fifth-largest producer of CO2 emissions in the world.

As it stands, all fossil-fuel exploration has to stop and fossil-fuel use has to be phased out quickly for us to have any chance of avoiding climate catastrophe. But Russia is still merrily digging away for fossil fuels and helping to ruin any chance of that happening.

As Rystad Energy pointed out in December 2018, Russia was an ‘oil and gas exploration winner’ that year. It topped “the discovery countries ranking” along with the US and Guyana:

Offshore Russia, Novatek drilled its first exploratory well in the North Obskoye block in the shallow waters of Ob Bay. This is the largest discovery to date this year and is estimated to hold recoverable resources of around 960 million barrels of oil equivalent.

Meanwhile, the Arctic is enduring record-breaking ice loss (and spent the summer on fire) due to the warming of the Earth. Nonetheless, Putin’s state oil companies are busily drilling for more oil in the region.

Indeed, adults do deserve condemnation for putting children and teenagers into extreme situations. But it’s not parents – or whoever else Putin may be suggesting – who deserve blame for putting Thunberg into the situation she now finds herself in. It’s the adults, including him, who’ve recklessly landed today’s youth in a world on the brink of environmental collapse.