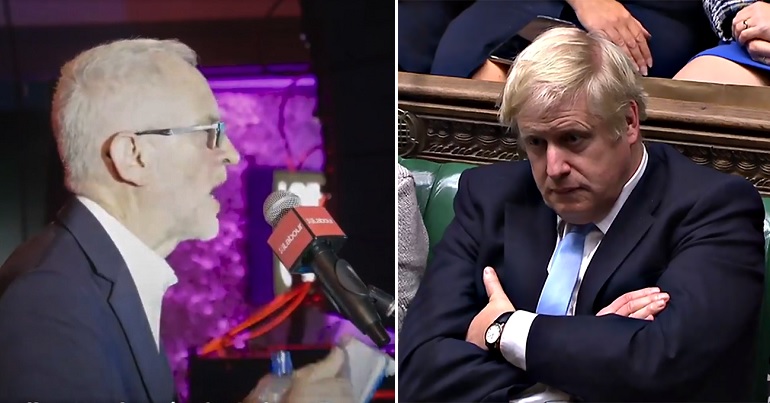 On 19 October, in a special parliamentary session labelled ‘Super Saturday’, MPs rejected the Brexit deal proposed by PM Boris Johnson. The outcome is a huge blow to Johnson, who was forced to send a letter to the EU to request an extension in keeping with the Benn Act.

Johnson has been consistent in resisting an extension to the 31 October Brexit date. Yesterday’s vote, compelling him to request an extension, has therefore made him the centre of more than a few jokes:

The ‘man who could get a deal done’, couldn’t pic.twitter.com/oqAhDYsLKn

Boris Johnson: “dismayed by this result”

“I would rather die in a ditch than send a letter of extension” Boris Johnson 😱 pic.twitter.com/txkM3tCGYg

Others, meanwhile, called out the glaring hypocrisy in the establishment media’s response to Johnson:

Do you remember the media furore when it was said that Corbyn “had not bowed low enough” at Remembrance Day service (although his bow was as low as many other leading figures)?

Our MSM – including BBC – is a disgrace

Dear UK journalists,
It's not important whether he signed the frigging letter or not.
HE BROKE HIS PROMISE. He said he'd rather die.
Please stop your stomach-churning hat-doffing to this Eton idiot, get your balls back and start HOLDING JOHNSON AND CO. TO ACCOUNT.
Regards,
Tom https://t.co/z2pwljER9N

After Johnson’s humiliating defeat in parliament, Corbyn addressed a rally in Liverpool with a message of hope:

My message to Boris Johnson and company: jog on with your daft ideas.#Marr #Ridge pic.twitter.com/1FzxoJwafy

And calls for a general election are doing the rounds again in the wake of the Super Saturday vote:

Whatever happens today, the Brexit crisis has been an ETON MESS from start to finish.

Only a GENERAL ELECTION can sweep the Tories from power and elect a Labour government for the many.

Complying with the law

There have been growing calls for Johnson to comply with the law and engage in negotiations to extend the Brexit deadline. Many people, including shadow chancellor John McDonnell, criticised Johnson’s potential contempt:

John McDonnell says Johnson is 'behaving like a spoiled brat'.

He also says this may be contempt of court and, we say, there should not be one law for them and another for us — their privileged positions shouldn't protect them.#JailJohnson #Ridge #Marrpic.twitter.com/L2HGJKAnys

Breaking: Boris Johnson sends unsigned photocopy of letter to EU, stressing it's Parliament's letter & not his, requesting extension to Article 50. This puts him in contempt of court and would land an ordinary person in prison.

Who else thinks Boris Johnson should go to prison?

Boris Johnson has lied to the Queen, unlawfully suspended Parliament, is trying to rig the next General election with voter suppression & now, by refusing to sign the Brexit extension letter has shown his utter contempt for Parliament & the Courts https://t.co/88jKP6xdsI

The PM sent a letter to EU leaders without signing it. He also added a note to say he still thinks the UK should leave the EU on 31 October. However, commentators are calling Johnson’s antics “spin” and “bluster”:

This is such transparent spin. The excerpt he’s sent literally says “Prime Minister of the United Kingdom” at the bottom of it and Tusk has already acknowledged receiving a request to delay.

Whether or not Johnson signed it is irrelevant. pic.twitter.com/T42ZobM7nO

The thing that matters here is that the EU had received an extension request from the government which it may now act upon. Everything else – all of it – is performative bluster intended to disguise this, and the above tweet is why such bluster works.

Forget the spin and the other letters. The story of the night is that Boris Johnson has sent the letter and asked for an extension, after saying he never ever would.

Ultimately, the PM has sent the letter mandated by the Benn Act, and the EU will respond to it accordingly:

The extension request has just arrived. I will now start consulting EU leaders on how to react. #Brexit

how will EU deal with Number 10 letter? EU source: “They take the letter on its merits and ignore the others.“

Johnson famously said that he’d “rather be dead in a ditch” than request an extension to the 31 October Brexit deadline. Regardless of what happens this week, at least those who see through his lies and grandstanding will enjoy watching him eat his words.