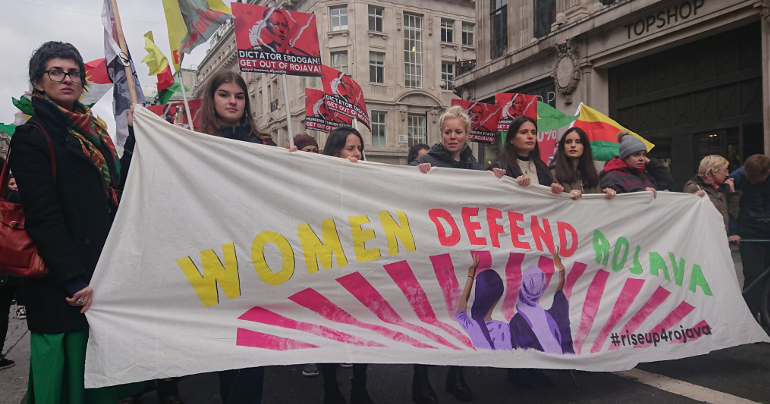 Thousands of people have taken over the streets of central London. They’re protesting against Turkey’s illegal invasion of the majority-Kurdish region of north-eastern Syria (known as Rojava).

“Turkish troops out of Kurdistan!”

#riseup4rojava Huge rally in London to condemn Turkeys genocide v the Kurds and our UK Tory government appeasing it’s war crimes ,selling arms. Support the Kurds who have been betrayed. 11, 000 killed. Millions refugees. The Rojava miracle must not be destroyed. I weep

The protest began at the BBC, and then the huge crowd marched through London, chanting “Turkish troops out of Kurdistan!” and “boycott Turkey!”

Turkey’s goal is to ethnically cleanse a 30km strip of Rojava, meaning that all major cities in Rojava would be under Turkish control. This week, it was reported that Turkey has allegedly been using white phosphorus against the people of Rojava. Turkish-backed jihadists have been carrying out killing sprees with impunity.

Betrayal by the US

Elif Gun, of the Kurdish Youth Assembly, spoke to the massive London crowd. She said:

It is disgraceful for the Trump administration to make up a deal with Turkey over northern Syria, over a phone call, leaving the Kurdish community defenceless.

Since Turkey invaded Rojava on 9 October, there have been massive demonstrations all over the world. Last week, 22,000 people protested in London alone. Thousands also took to the streets in cities including Paris, Milan, and Turin this weekend:

Thousands in #Riseup4Rojava demo in Paris demanding an end to Turkey's war of aggression, war crimes against NE Syria and freedom for illegally abducted political prisoner Öcalan.https://t.co/Sj6bpXiXBn
Full video in the article. pic.twitter.com/swNouGogIk

Meanwhile, in Rojava, a second ambulance convoy has successfully evacuated injured patients from a hospital in the besieged town of Serê Kaniyê‎. Turkish-backed factions have been reportedly targeting the hospital every few hours.

In London, a speech was read out from British revolutionary Dani Ellis, who’s currently in Rojava resisting the Turkish invasion. Dani stated:

In the resistance of Serê Kaniyê‎, a small group of Kurds, Arabs, Syriacs and international anarchist volunteers have held out now for almost two weeks against one of the biggest and best equipped armed forces on the planet. They have shown the same spirit as the defenders of Kobanî that made this revolution so famous.

But during a so-called ‘ceasefire’ – throughout which they were mercilessly bombed, shelled and shot at – these fearless defenders were yet again betrayed by the Americans, forcing on them and the rest of the Syrian Democratic Forces a capitulation and withdrawal from their ancestral homeland that they had defeated ISIS in just years before.

On 20 October, the Syrian Democratic Forces (SDF) withdrew all their forces from Serê Kaniyê.

“Left out on their own”

The Rojava Information Center has published new footage of a US convoy heading east as part what it says is the ‘total US withdrawal from the western regions of Kobanî, Tabqa, Raqqa and Manbij’.

Dani Ellis continued by stating that the Kurdish people have once again been “left out on their own, with no friends and nowhere to turn”.

Yet again, their land, their families and their very independence are being attacked and ripped from them.

“This resistance will continue”

Dani told the crowd how it’s important that everyone takes action from home:

While some of us fight here on the ground with our weapons, it is just as important that our friends abroad fight this Turkish aggression with words, with protest and with direct action, because this is not just a fight for one group of people. This is a fight for dignity, for democracy and for humanity. It is a war that all parts of society must come together to wage, not just the soldier on the battlefield.

The huge numbers of protesters on the streets show that the movement to support Kurdish people is growing around the world. It’s clear that over the coming weeks, more and more people will be taking action to resist Turkey’s war on Rojava.