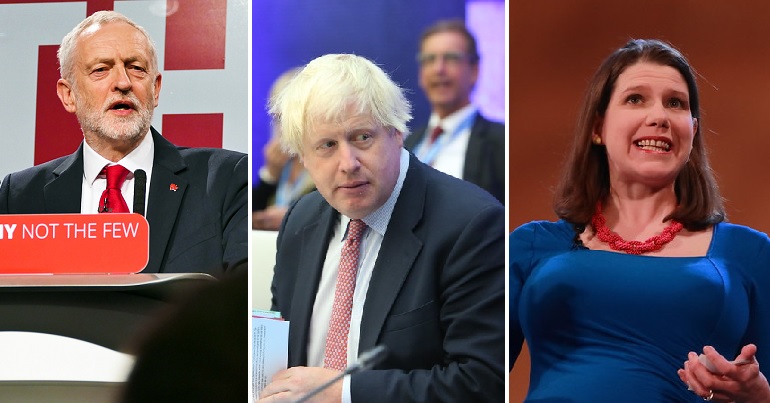 On 27 October, in a desperate attempt to undermine Labour and push their pro-Remain platform, the Lib Dems joined forces with the SNP to call for an earlier general election.

However, Conservatives have since rejected this proposal:

As the BBC reported, SNP Westminster leader Ian Blackford said this plan was to ensure an election “on parliament’s terms not on the prime minister’s”. Blackford said:

Opposition parties will not be bullied by a prime minister who has shown utter contempt for Parliament, and who has attempted to railroad through his damaging deal without a shred of scrutiny or due process.

It’s possible that they also pushed for the slightly earlier date of 9 December over fears the EU might grant a short Brexit extension. This shorter extension could mean more pressure on MPs to approve Johnson’s proposed deal.

However, this move has still been widely criticised:

to the SNP and LibDems who allegedly will support an early GE.. you do realise of course nothing stopping Boris doing the dirty on Oct 31st and removing the UK whilst you think he cannot – why do you think he is calling an election he doesn.t care if he loses? how stupid are you pic.twitter.com/8jYst8oaNh

Good luck with that, SNP. The last time the Lib Dems joined forces with another party, they inflicted 5 years of austerity on those who could least afford it. https://t.co/j4BSc8PlOO

It also came as a bit of a surprise to some, that the SNP ‘teamed up’ with the Lib Dems:

SNP were saying officially a December election would be a disaster weather wise and so it should not happen only 24 hous ago.

Now they team up with austerity enablers Lib Dems for a stunt that confuses their supporters and is an amazing u-turn.

The Lib Dems, it seems, refuse to accept that the Conservatives aren’t interested in any agenda other than their own:

There we have it. The Tories don’t want a December election. They want their hard Brexit more. Their bluff totally called. #Marr

In fact, The Canary’s Kerry-Anne Mendoza described this move as “political suicide”:

It’s time for proper left-wing SNP MPs to mutiny. This is political suicide.

If Labour win the GE, they can brand SNP as Mustard Tories.

As The Canary‘s Emily Apple has said, “If you’re going to vote Lib Dem, you might as well vote Tory”.

Many people appear to be in agreement with this sentiment. It’s clear that they see past Swinson’s desperate attempts to hold on to power by any means necessary:

Jo Swinson is still a Tory.

The lure of a Ministerial limousine is chipping away at her, no matter the cost.

She wants an election because the Lib Dems peaked, and every MP she can secure is another MP towards her ambition of being Deputy Prime Minister.

Swinson is just another crook that came for power and cushy life under umbrella of politics, people need to know that. https://t.co/olIiKF0ZeJ

On more than one occasion the Lib Dem leader, Jo Swinson, has made it clear she couldn’t support anything that would put Jeremy Corbyn in to power.

This is because Swinson knows a Socialist Labour Government will close the door on her neoliberal ideology once and for all. #Marr

It’s clear that Johnson wants to call a general election before ruling out a no-deal Brexit. Because if Johnson were to win an election with no-deal still on the table, he would have the green light to push this through parliament – a move that would be catastrophic for British people:

The Longer Corbyn holds out for a General election the more Johnson gets exposed for what he really is. The latest revelations on workers rights proves this point. Any worker supporting the Tories really needs to assess their own intellectual processes.

Labour won’t back a 12 December election unless no-deal is off the table, and the final decision will be based on the vote in parliament on 28 October. As Corbyn and shadow home secretary Diane Abbott have made clear, Labour will back a general election once Johnson rules out any possibility of a no-deal Brexit.