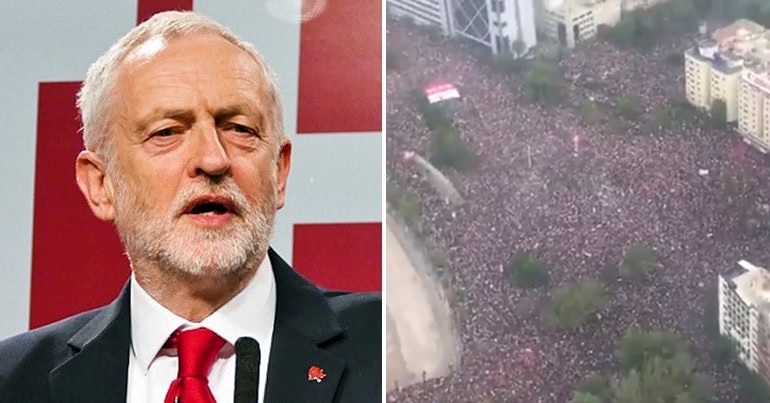 In recent days, UK Labour Party leader Jeremy Corbyn has shone an important light on the struggle for justice in Latin America. And this comes at an especially pertinent point, as the region resists an ongoing US-backed assault by an empowered hard right.

Standing up to US imperialism

The most extreme form of capitalism – neoliberalism (i.e. austerity, privatising anything public, and giving companies total freedom to do what they want) – has been incredibly destructive. It’s brought misery to ordinary people around the world for decades. And even its main backer has admitted that it’s boosted inequality. Today, however, US-backed neoliberal governments are in power across South America, from Ecuador to Brazil, Argentina, Chile, and Colombia. Latin American governments that have challenged neoliberalism, meanwhile, have suffered increasing attacks from the US-sponsored right since Donald Trump took power.

One of the governments currently facing the hostility of the pro-US right is in Bolivia, where people have just re-elected left-of-centre Evo Morales. As The Canary reported, his government has lifted “millions of people out of poverty” and overseen very impressive economic growth despite “deep economic crises and an economic slowdown elsewhere in Latin America”. And Corbyn took to Twitter to praise Bolivia’s regional example, saying:

Congratulations to @evoespueblo on his re-election as Bolivia's President.

As trade unionists and other activists recently pointed out, however, “there is growing concern” that Washington and its allies are now looking to destabilise the Bolivian government. Indeed, there have already been violent US-backed protests and weak attempts to delegitimise the recent election.

Corbyn hasn’t just backed left-of-centre governments, though. He’s also stood alongside protesters when they’ve resisted elitist neoliberal repression. For example, he recently praised “people in Ecuador that are standing up against what the IMF [International Monetary Fund] are doing”. The IMF is a powerful and highly controversial global supporter of neoliberalism.

Amid recent repression in Western-backed Chile, meanwhile, Corbyn spoke out about the extreme violence of Chilean authorities, saying:

The killing of peaceful protesters by the military in Chile is deeply disturbing.

The people of Chile rid itself of a fascist military junta in 1990 and they cannot return to those dark days.

Their demands are legitimate and represent the concerns of people around the world.

Massive numbers of protesters in Chile have been gathering to resist their government’s increasingly elitist policies:

Chileans demand a new constitution. Truckers are blockading motorways. Port workers and copper workers on strike. The Curfew isn't stopping demonstrations. Government has no legitimacy. Doubtful it can survive this for long. A new dawn beckons for the people of Chile! https://t.co/ptX7zvEVwZ

Chile was the testing ground for neoliberalism – enforced by a brutal dictatorship and then exported worldwide by Thatcher and the rest.

These amazing scenes show the Chilean people are saying enough is enough.

Solidarity with all those marching for a better future! pic.twitter.com/0GC0eqw823

This is what is happening in Chile.

Violent repression from the military of anti-austerity protesters. Police brutality which has caused death & severe injuries.

Barely reported in the Western media because the US supports Chile's right wing government.pic.twitter.com/1wlzdKu1Ug

"We condemn the repression faced by our trade union sisters and brothers and wider social movement in Chile." TUC statement on situation in Chile calling for an end to the state of emergency. pic.twitter.com/nsBP8npu37

As a result of the protests and repression, Chile’s president has apparently now sacked his entire cabinet. He claims he will listen to protesters’ demands.

Corbyn yet again on the right side of history

In Latin America, it’s becoming increasingly clear that there’s a war raging between those fighting for social justice and those fighting to prevent it. And Donald Trump’s government in the US is right behind the elitist offensive to protect the rich and powerful. Jeremy Corbyn, meanwhile, is very clearly on the side of ordinary people who are bravely standing up for a brighter future.